The Second Battle of Newtonia was fought on October 28, 1864, in Newton County, Missouri, as part of Major General Sterling Price's Missouri Expedition of the American Civil War. 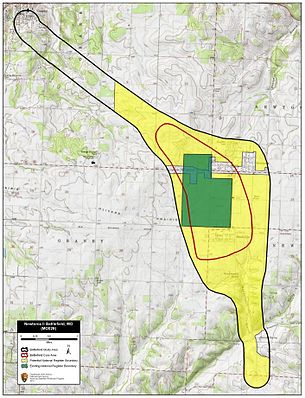 Blunt formed the 16th Kansas Cavalry and 2nd Colorado Cavalry in two lines and personally led a charge behind a screen of skirmishers toward the fleeing supply train. Most of the rebel skirmishers were in no condition (physically or mentally) to resist, and they were soon tumbling backwards. Brig. Gen. Joseph O. (Jo) Shelby's mounted infantry division, including his "Iron Brigade", rode to the front, dismounted, and engaged the Union force. Shelby's men overlapped the flanks of the smaller Union force and forced it back into a large cornfield near the Matthew H. Ritchey estate. There, fighting raged until Federal cannon fire and reinforcements under Brig. Gen. John B. Sanborn finally caused the Confederates to retreat at nightfall. However, Shelby had accomplished his mission in holding up the Union pursuers. By morning, Price had retreated across the desolate prairie towards the Indian Territory.

Despite the duration and ferocity of the firefight, casualties were rather light (400 for the Federals versus 250 for the Confederates).

Today, most of the battlefield is in private hands. Twenty acres (81,000 m²), plus the Ritchey mansion, are owned by the Newtonia Battlefield Preservation Society.

The Second Battle of Newtonia Site is a historic battlefield site listed on the National Register of Historic Places in 2004.[1] The site consist of the battlefield site as a whole plus what has been designated as the cornfield site, the artillery ridge site and the Granby Road site.[2]:5 The Civil War Trust (a division of the American Battlefield Trust) and its partners have acquired and preserved 8 acres (0.032 km2) of the Newtonia battlefield.[3]