Traffic alongside the Camden National Bank downtown; Ellsworth is now the fastest growing city in the state of Maine. 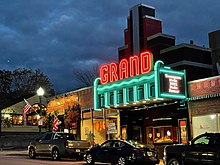 The neon lights of The Grand's marquee light up Main Street in downtown Ellsworth, Maine at dusk.

The Ellsworth American newspaper has operated since 1851.

A glimpse of Indian Point Preserve Trail, a rural enclave in Ellsworth

Ellsworth is a city in and the county seat of Hancock County, Maine, United States.[3] The 2020 Census determined it had a population of 8,399.[4] Named after United States Founding Father Oliver Ellsworth, it contains historic buildings and other points of interest, and is close to Acadia National Park.

George J. Varney, in the 'Hancock County, Maine' section of his Gazetteer of the State of Maine, published in Boston in 1886, wrote:

"The first European who made definite mention of the Penobscot Bay and river, which wash its western side, was Thevet, a French explorer, in 1556. Martin Pring and Captain Weymouth, the English explorers, sailed along its shores in 1603 and 1605, and DeMonts, the Frenchman, explored some portions of the coast in 1604 and 1605. There is a tradition that Rosier, the historian of Weymouth's expedition, explored Deer Island thoroughfare, making a halt at the bold promontory in Brooksville, known as Cape Rosier. They found the county occupied by a tribe of Indians, who with those on Passamaquoddy waters, were noted for their long journeys in canoes; whence the general name for these Indians, Etechmins. DeMonts claimed the country in the name of the King of France in the true Catholic style, setting up a cross and calling the country "Acadie." By this name it continued to be known until the capture of Quebec by General James Wolfe in 1759. When Weymouth came in 1605, he also claimed the country in the name of his King, James I of England. Thus the two leading powers of Europe became adverse claimants of the soil of Hancock County, and the wars these claims occasioned kept the county an almost unbroken wilderness during the provincial history of Maine."

It is likely that the French who founded a colony at Somes Sound on Mount Desert Island in 1613, under the patronage of Madame de Guercheville, explored the Ellsworth area and what is now the watershed of the Union River. Varney believes that there were French settlements of some kind or another as close to Ellsworth as Trenton, Oak Point, Newbury Neck and Surry.

The Ellsworth area was disputed between the English and the French throughout the 17th century and well into the 18th century, occasioning intermittent warfare which was known to the English as the French and Indian Wars. Native American inhabitants may have converted to Roman Catholicism and fought with the French against the British until the fall of Quebec City to the British in 1759. After the 1763 signing of the Treaty of Paris by the governments of the United Kingdom, France, Spain and Portugal, Ellsworth became part of the Commonwealth of Massachusetts.

The modern history of Ellsworth begins with the settlement of the Union River area around 1763 by a party of English led by entrepreneurs Benjamin Milliken and Benjamin Joy, from present-day southern Maine and New Hampshire, who intended to build dams and sawmills to exploit the area's timber and water power. They applied for grants offered by the Commonwealth of Massachusetts to encourage settlement of the Hancock County area. Historian Albert H. Davis in his History of Ellsworth, Maine, published in Lewiston, Maine, in 1927, relates what is known of this early expedition and points to the northern end of the present Water Street, just to the south of the present bridge across the Union River, as the site of the earlier crude buildings erected by the pioneers.

George J. Varney describes the process of land grants by the Commonwealth of Massachusetts:

"The first grants of land in the county were six townships, each six miles square, between the rivers Penobscot and Union (then known as the Donaqua), which were granted to David Marsh et al., by the General Court of Massachusetts, upon conditions, one of which was that they should settle each township with 60 Protestant families within six years. These grants were No. 1, Bucksport; 2, Orland; 3, Penobscot; 4, Sedgwick; 5, Blue Hill; and 6, Surry. Six other townships east of the Union River were granted on the same terms; three of which are in this county, viz.: No. 1, Trenton, granted to Eben Thorndike, et al.; 2, Sullivan, to David Bean, et al.; and 3, Mount Desert (Island) to Governor Bernard. The surveys were made by Samuel Livermore; and as there were three of the townships on each side of the river, it gave rise to the name which the stream now bears."

In 1773 the first schooner was built at Ellsworth. This was the Susan and Abigail, named after daughters of the two most prominent citizens, American Loyalist Benjamin Milliken and Benjamin Joy. The vessel carried pine shingles and oak staves in annual voyages to the West Indies. In the years up to the beginning of the 20th century, many schooners of various sizes were built in Ellsworth shipyards along the Union River.

Albert Davis records that in the latter part of the 18th century, Ellsworth was known as the Union River Settlement and was adjacent to the settlements of Surry (to the east) and Trenton (to the south). Later it was organized as Plantation No. 7 and at times called Bowdoin and New Bowdoin. In 1798 the inhabitants petitioned to be incorporated under the name Sumner. That name having been already taken by a settlement in present-day Oxford County, Maine, the town was incorporated by the Commonwealth of Massachusetts in 1800 as Ellsworth, named for Oliver Ellsworth, the Connecticut delegate to the 1787 National Convention that was then working on a Constitution for the new United States of America, and later the third Chief Justice of the Supreme Court. Oliver Ellsworth is thought to be first to suggest the name "United States of America".

Davis reports that in the late 1770s, there were British raids on the Union River Settlement, with attempts to appropriate local cattle. However, there were no formal battles in the Ellsworth area during the Revolutionary War.

Between 1860 and 1865, Ellsworth sent 653 soldiers to fight in the Civil War, according to historian Albert Davis. This was at a time when there were only 847 (male) voters in the area. Military training was held in front of the county buildings on Bridge Hill, west of the Union River, at the site of the present Civil War Monument.

In 1869, Ellsworth was incorporated as a city by the Maine Legislature. The first City Hall was Hancock Hall, which stood at the corner of Main Street and School Street. It was destroyed by the Great Ellsworth Fire of 1933.

In 1888, electricity was introduced into the Ellsworth area.

The disputed city elections in 1896 resulted in the appointment of two separate Ellsworth police forces, each of which threatened to arrest the other.

Work on the Ellsworth hydro-electric dam began in 1907, at the site of one of the original Benjamin Milliken Union River dams. This led to the creation of the present Leonard's Lake just north of the city.

Ellsworth's first disaster of the 20th century was the Great Flood of 1923. A spring freshet rushed over the dam and carried off the metal Union River Bridge, along with many buildings along the river, such as the Dirigo Theater, the Foundry and many wharves and warehouses. This event marked the end of Ellsworth's prominence as a shipping center. The present concrete bridge was finished in 1924.

The Great Fire of 1933 destroyed most of Ellsworth's downtown commercial district, on the east side of the Union River. New buildings were built in brick, mainly in Art Deco style. The unique Ellsworth City Hall dates from this period. Many old houses outside the business district survived the conflagration.

The 1960s and 1970s saw the development of an Ellsworth business district on High Street, which is the direct route to and from Bar Harbor and Acadia National Park. This area is now the largest shopping district in Hancock County, with several shopping centers and many large stores, stretching nearly to the Ellsworth-Trenton boundary.

Ellsworth has a humid continental climate (Köppen: Dfb) of the warm summers type. As much of Maine winters are harsh and snowy throughout the season even being at latitudes similar to southern France, such discrepancies are due to the western patterns and the Labrador Current.[8][9] Places to the northwest of the city as around Branch Lake the USDA resistance zone is 5a, in the urban area it is 5b as much of the state coastline.[10] 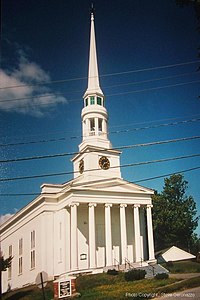 There were 3,305 households, of which 29.3% had children under the age of 18 living with them, 47.0% were married couples living together, 10.6% had a female householder with no husband present, 4.3% had a male householder with no wife present, and 38.0% were non-families. 30.2% of all households were made up of individuals, and 12% had someone living alone who was 65 years of age or older. The average household size was 2.27 and the average family size was 2.81.