Helena–West Helena is the county seat of and the largest city within Phillips County, Arkansas, United States.[3] The current city was consolidated, effective January 1, 2006, from the two Arkansas cities of Helena and West Helena. Helena is sited on lowlands between the Mississippi River and the eastern side of Crowley's Ridge. West Helena is located on the western side of Crowley's Ridge, a geographic anomaly in the typically flat Arkansas Delta. The Helena Bridge, one of Arkansas' four Mississippi River bridges, carries U.S. Route 49 across to Mississippi. The combined population of the two cities was 15,012 at the 2000 census and at the 2010 census, the official population was 12,282.[4]

The municipality traces its historical roots to the founding of the port town of Helena on the Mississippi River by European Americans in 1833. As the county seat, Helena was the center of a prosperous cotton plantation region in the antebellum years. Helena was occupied by the Union Army early in the American Civil War. The city was the site of the Battle of Helena fought in 1863. Confederate forces unsuccessfully tried to expel Union forces from Helena in order to help relieve pressure on the strategic river town of Vicksburg, Mississippi. Later in the year, Helena served as the launching point for the Union Army in the capture of Little Rock, the state capital.

A thriving blues community developed here in the 1940s and 1950s as rural musicians relocated for city jobs. Mechanization had reduced the need for farm workers. The city continued to grow until the closing of the Mohawk Rubber Company, a subsidiary of Yokohama Rubber Company, in the 1970s. Unemployment surged shortly after.[5]

Among the attractions in Helena–West Helena are the Delta Cultural Center, the Pillow-Thompson House (owned and operated by the Phillips Community College of the University of Arkansas), and the Helena Confederate Cemetery, which holds the remains of seven Confederate Army generals.[6] The city holds an annual King Biscuit Blues Festival each October. It has been held under this name since 2010, when it was renamed at a 25th-anniversary performance by musician B.B. King.

The view from the Battery C park over downtown Helena. Battery C was a station in the Battle of Helena. 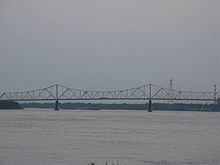 The Pillow Thompson House in Helena. An example of Queen Anne-style architecture

The view from the Helena, Arkansas Confederate Cemetery of the area of the Battle of Helena

The historical Confederate graveyard placard from the Battle of Helena

During the Civil War, the Union Army occupied Helena prior to the Battle of Helena in 1863. In the early morning hours of July 4, 1863, Confederate forces attempted to retake Helena in order to help relieve pressure on the strategic river town of Vicksburg, Mississippi. Confederate forces in Vicksburg had already arranged to surrender to General U.S. Grant on the morning of July 4. Many of the former battle sites are still intact. Helena may benefit from developing and protecting these historic areas for destination tourism.

Prior to consolidation, Helena contained 6,323 people within 23.1 km². Neighboring West Helena had 8,689 people in 11.5 km². Merger proposals began as early as 2002, and a March 2005 vote among citizens of both cities approved the merger. The surrounding rural county is one of the poorest of Arkansas' 75 counties. Proponents of the consolidation said that combining the cities would strengthen their bargaining power for the surrounding region in competing for projects to improve the overall economy and standard of living. Among the combined city's council's first tasks was the hiring of a new police chief. They chose Vincent Bell.

There were 2,312 households out of which 32.7% had children under the age of 18 living with them, 33.8% were married couples living together, 28.5% had a female householder with no husband present, and 33.3% were non-families. 30.0% of all households were made up of individuals and 13.4% had someone living alone who was 65 years of age or older. The average household size was 2.62 and the average family size was 3.28.

There were 3,204 households out of which 36.0% had children under the age of 18 living with them, 36.8% were married couples living together, 29.2% had a female householder with no husband present, and 30.6% were non-families. 27.6% of all households were made up of individuals and 11.5% had someone living alone who was 65 years of age or older. The average household size was 2.71 and the average family size was 3.32.

With a median income of $19,896 for a household, the city is one of the poorest in the nation. One potential advance for the combined city, as reported by the Arkansas Democrat-Gazette on July 12, 2006,[7] is an ethanol fuel refinery to be built by Las Vegas-based E-Fuels. Whether the consolidation had any bearing on the decision is not certain. If the project is developed, it is expected to bring several new jobs and a significant increase in traffic to the region's port on the Mississippi River.

In 2006, the city announced plans to reopen the regional landfill, from which Helena–West Helena could earn fees.[8]

Helena–West Helena's chief economic base continues to be agriculture, specifically cotton cultivation. Mechanization and large industrial farms have reduced the need for farm labor since the first half of the 20th century. Barge traffic at the city's port on the Mississippi River is another source of jobs and revenues, in addition to retail and tourism.

The Helena-West Helena World is the local newspaper.

In the 1940s and 1950s, Helena attracted blacks from rural Arkansas and the Mississippi Delta, who came for the jobs. Some also worked full-time as musicians. By then Helena was 70% black, and juke joints employed such blues pianist as Sunnyland Slim, Memphis Slim and Roosevelt Sykes.[9]

In November 1941, a white businessman put together the staff for the town's first radio station KFFA. A group of blues musicians were given a one-hour radio spot on the condition that they gain a sponsor. King Biscuit Flour agreed to do. The King Biscuit Entertainers were sponsored, as well as the show King Biscuit Time, featuring blues musicians.

The King Biscuit Blues Festival was organized in the late 20th century as an annual October event. It was renamed as the Arkansas Blues and Heritage Festival in 2005, and is one of the largest blues festivals in the world. The celebration is held in downtown Helena on Cherry Street in early October.[10] It was renamed in 2010 as the King Biscuit Blues Festival at a 25th anniversary performance of renowned musician B.B. King.

The lyrics of "Stand Up Guy" by Mark Knopfler make reference to West Helena.[11]

KIPP: Delta Public Schools operates a group of charter schools in the municipality.

Helena previously had a Catholic grade school for black children, St. Cyprian School; it closed in 1963. [12]