The OSU College of Medicine can trace its roots as far back as March 3, 1834 with the founding of the Willoughby University of Lake Erie in Willoughby, Ohio. Dr. Westel Willoughby (1789–1844), the school's namesake and first president, oversaw the operation of the school until 1843, when a disagreement among the faculty led to their resignation from the school.[2]

In 1847 the disgruntled faculty members started the Willoughby Medical College of Columbus in Columbus, Ohio, receiving a new charter from the Ohio Legislature on January 14, 1847. The inaugural student body consisted of 150 students, including dozens of medical students who had transferred from Willoughby University of Lake Erie.[2] Almost immediately upon opening, the school was contacted by wealthy local business owner Lyne Starling, who offered $35,000 to construct a new hospital and school complex in Columbus. The concept of a hospital dedicated to teaching medical students was groundbreaking at the time.[2] 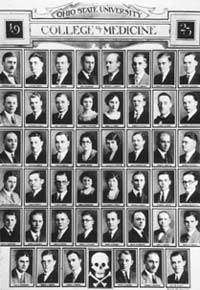 The Ohio State University College of Medicine Class of 1923

The Ohio State College of Medicine was established in 1914 with William Means as the first dean. In the 1940s, the school had a two-year medical education program. In the 1970s, this was extended to three years, and then four years in the 1980s.[4]

Admission to The Ohio State University College of Medicine is highly selective. For the class entering in 2017, OSU received 7,199 applications and interviewed 673 applicants for a class of 197 medical students. The matriculating class had an average GPA of 3.74 and an average MCAT score of 34.[5]

The Ohio State University Wexner Medical Center has grown into a large complex with numerous specialty centers, hospitals, and research buildings. 44,000 patients are admitted into the OSU system every year. Another 635,000 are seen as outpatients (including outpatient surgery and 75,000 emergency patients).

Leadership at the Dean level for the college has been fluid, with no fewer than 5 individuals holding the position in the last 10 years.

Pioneer Carl Leier developed dobutamine, the revolutionary drug treatment to help heart failure. Bertha Bouroncle discovered hairy cell leukemia in 1958 and developed a treatment for it, deoxycoformycin, nearly 30 years later along with Michael Grever and Erik Kraut.[4] Kazi Mobin-Uddin who invented the first inferior vena cava filter was a faculty member. discovered a founder mutation in cancer. William Hunt and Robert Hess in the Department of Neurological Surgery developed the Hunt and Hess scale for grading the severity of intracranial hemorrhages.[citation needed]

Zollinger-Ellison syndrome was defined by two OSU faculty, Robert Zollinger and Edwin Ellison, in the 1940s. The first helicopter-based medical rescue was implemented at OSU in the 1960s.[4]

Educational firsts by the Ohio State College of Medicine include an independent study curriculum in 1970, and a human cancer genetics fellowship. Ohio State was the first medical center in the United States to complete a heart bypass using minimally invasive robotics technology and the first to insert a digital pacemaker in a patient. Ohio State is a world leader in imaging research, installing the world's most powerful magnetic resonance imaging scanner in 1998, the 8 tesla MRI.[8]

In 2000, Ohio State graduates Peter Kourlas and Matthew Strout conducted genetic research that led to the discovery of a gene that plays a role in acute myeloid leukemia. Their work was conducted in the lab of Michael A. Caligiuri, a researcher recognized for his work in leukemia, lymphoma and immunology.[9]

In 2009, scientists at the university were the first to observe the real time behavior of the enzyme , which aid studies understanding the molecular basis for cancer and other diseases.[10] Later that year scientists developed technology that can magnetically manipulate cancerous cells.[11]

The Ohio State University Wexner Medical Center has had several firsts and breakthroughs in robotic surgery.

In 1999, Randall Wolf and Robert Michler became the first in the country to perform a robotically assisted heart bypass. While under the direction of Michler in 2009, the center became the first in North America to use the da Vinci HS SI robot during a surgery.[13] In 2009, Ohio State was the first to demonstrate single incision robotic kidney surgery.[14]

In 2017 and 2018, it was revealed that three faculty members separately involved in cancer research at OSU had falsified research findings. Carlo M. Croce, chair of the department of cancer biology and genetics, had 8 papers retracted and 15 more had corrections issued.[15] , a professor of cancer biology and genetics, has had five papers retracted after an investigation.[16] Ching-Shih Chen, professor in medicinal chemistry and pharmacognosy, is under investigation for at least 21 incidents of scientific misconduct.[17]