Skip to content
For other countries that use this rank, see Colonel.
Military rank of the United States

U.S. Army dress blue insignia of the rank of colonel in the Infantry branch. Style and method of wear may vary between the services.

U.S. Marine Corps insignia of the rank of colonel. Style and method of wear may vary between the services.

U.S. Air Force and U.S. Space Force insignia of the rank of colonel. Style and method of wear may vary between the services.

In the United States Army, Marine Corps, Air Force and Space Force, colonel (/ˈkɜːrnəl/) is the most senior field grade military officer rank, immediately above the rank of lieutenant colonel and just below the rank of brigadier general. It is equivalent to the naval rank of captain in the other uniformed services.[note 1] By law, an officer previously required at least 22 years of cumulative service and a minimum of three years as a lieutenant colonel before being promoted to colonel.[1] With the signing of the National Defense Authorization Act of 2019 (NDAA 2019), military services now have the authorization to directly commission new officers up to the rank of colonel.[2] The pay grade for colonel is O-6.

When worn alone, the insignia of rank seen at right is worn centered on headgear and fatigue uniforms. When worn in pairs, the insignia is worn on the officer's left side while a mirror-image reverse version is worn on the right side, such that both of the eagles’ heads face forward, to the wearer's front. 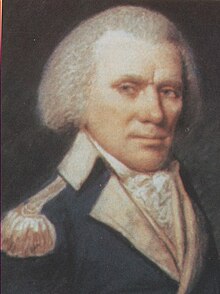 William Few in the uniform of a Continental Army colonel

The insignia for a colonel is a silver eagle which is a stylized representation of the eagle dominating the Great Seal of the United States (which is the coat of arms of the United States). As on the Great Seal, the eagle has a U.S. shield superimposed on its chest and is holding an olive branch and bundle of arrows in its talons. However, in simplification of the Great Seal image, the insignia lacks the scroll in the eagle's mouth and the rosette above its head. On the Great Seal, the olive branch is always clutched in the eagle's right-side talons, while the bundle of arrows is always clutched in the left-side talons. The head of the eagle faces towards the olive branch, rather than the arrows, advocating peace rather than war. As a result, the head of the eagle always faces towards the viewer's left.

However, when worn as a single insignia with no matching pair, such as on the patrol cap, garrison cap/flight cap, or the front of the Army ACU, there is a split between the services on which mirror image of the eagle should be worn. In the United States Army and United States Air Force, the eagle is always worn with "the head of the eagle to the wearer's right," with the olive branch clutched in the eagle's right hand talons (see Department of the Army Pamphlet 670-1, paragraph 19-6 (a)(1)). In the United States Marine Corps, United States Navy, United States Coast Guard and NOAA, the eagle is worn with "the head facing forward" on the wearer's right side of the garrison cover (see Marine Corps Order P1020.34G, Uniform Regulation, paragraph 4005d(1)). Since respective service's officer insignia is worn on the left side and the rank insignia is worn on the right hand side of the Marine, Navy, Coast Guard and NOAA garrison caps, the eagle is facing to the eagle's left with the olive branch clutched in the eagle's left hand talons, which is a mirror opposite to the wear of the single eagle for Army and Air Force officers.

The United States rank of colonel is a direct successor to the same rank in the British Army. The first colonels in the U.S. were appointed from Colonial militias maintained as reserves to the British Army in the North American colonies. Upon the outbreak of the American Revolutionary War, colonial legislatures would grant commissions to men to raise a regiment and serve as its colonel. Thus, the first U.S. colonels were usually respected men with ties in local communities and active in politics.

With the post-war reduction of the U.S. Army, the rank of colonel disappeared, and was not re-introduced until 1802.

The first insignia for the rank of colonel consisted of gold epaulettes worn on the blue uniform of the Continental Army. The first recorded use of the eagle insignia was in 1805 as this insignia was made official in uniform regulations by 1810.[citation needed]

A shoulder strap from an infantry colonel in the Union Army

A shoulder strap from an infantry colonel in the Union Army

The rank of colonel was relatively rare in the early 19th century, partly because the U.S. Army was very small, and the rank was usually obtained only after long years of service. During the War of 1812 the Army grew rapidly and many colonels were appointed, but most of these colonels were discharged when their regiments were disbanded at the war's conclusion. A number of other colonels were appointed by brevet – an honorary promotion usually for distinguished service in combat.

The American Civil War saw a large influx of colonels as the rank was commonly held in both the Confederate army and Union Army by those who commanded a regiment. Since most regiments were state formations and were quickly raised, the colonels in command of the regiments were known by the title "Colonel of Volunteers," in contrast to Regular Army colonels who held permanent commissions.

During the Civil War, the Confederate Army maintained a unique insignia for colonel, three stars worn on the collar of a uniform. Robert E. Lee wore this insignia due to his former rank in the United States Army and refused to wear the insignia of a Confederate general, stating that he would only accept permanent promotion when the South had achieved independence.

After the Civil War, the rank of colonel again became rare as the forces of the United States Army became extremely small. However, many colonels were appointed in the volunteers during the Spanish–American War, prominent among them Theodore Roosevelt and David Grant Colson. 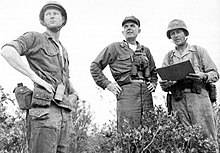 A U.S. Marine colonel (center) during the Vietnam War. 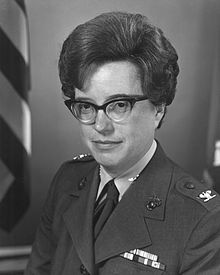 World War I and World War II saw the largest numbers of colonels ever appointed in the U.S. military. This was mostly due to the temporary ranks of the National Army and the Army of the United States, where those who would normally hold the rank of Captain in the peacetime Regular Army were thrust into the rank of colonel during these two wars.

The Military Promotion System was revised and standardized for all the services in 1980 as a result of passage of the Defense Officer Personnel Management Act.

Modern U.S. colonels usually command Army infantry, artillery, armor, aviation or other types of brigades, USMC regiments, Marine Expeditionary Units or Marine Aircraft Groups, and USAF groups or wings. An Army colonel typically commands brigade-sized units (4,000 to 6,000 soldiers), with another colonel or a lieutenant colonel as deputy commander, a major as executive officer, and a command sergeant major as a senior non-commissioned officer (NCO) advisor. An Air Force colonel typically commands a wing consisting of 1,000 to 4,000+ airmen with another colonel as the vice commander and a Chief Master Sergeant (a “Command Chief”) as principal senior NCO enlisted adviser. Some USAF colonels are commanders of groups, which are the major components of wings. Colonels are also found as the chief of staff at divisional level-(Army) or Numbered Air Force-level staff agencies.

Almost all Army colonels have attended a war college or a senior staff college equivalent to study joint warfare and war itself. Most Army colonels receive postgraduate level senior joint professional military education (JPME) at the Army War College in Carlisle, Pennsylvania[3] prior to promotion. The 2009 graduating class was 336 including 198 army officers and the rest divided among other military branches, domestic inter-agency representatives and other foreign military leaders.[4] The highest concentration of USAF colonels graduate from the Air War College at Maxwell AFB, Alabama via in-residence at Maxwell AFB. This program will include participation by officers from various other branches. Marine colonels may graduate from the Marine War College or, like all other branches, may receive credit via non-resident attendance at another installation, via correspondence, or will be graduates of an equivalent senior JPME program sponsored by the National Defense University or one of the other U.S. military services.[5]

Some people known as "colonels" are actually recipients of honorary colonel ranks from a state governor and are not officers of the U.S. military. In the 19th century, the honorary colonels were military appointments and they still are nominally appointed to a governor's staff, but without military rights or duties. Famous honorary colonels include Colonel Harland Sanders of KFC fame, a Kentucky colonel; Colonel Tom Parker, Elvis Presley's manager, who received the honor from a Louisiana governor; and Edward M. House, known as Colonel House, a Texas honorary colonel and adviser to President Woodrow Wilson.

Media related to Colonels of the United States at Wikimedia Commons