David John Eicher (born (1961-08-07)August 7, 1961) is an American editor, writer, and popularizer of astronomy and space. He has been editor-in-chief of Astronomy magazine since 2002. He is author, coauthor, or editor of 23 books on science and American history and is known for having founded a magazine on astronomical observing, Deep Sky Monthly, when he was a 15-year-old high school student.[1]

Eicher is also a historian, having researched and written extensively about the American Civil War.

Eicher began his career at AstroMedia Corp., the magazine's publisher, in September 1982 as assistant editor of Astronomy magazine and editor of Deep Sky.[2] In 1985 Kalmbach Publishing Co.,[3] the Milwaukee publisher of Model Railroader, Trains, and other titles, bought AstroMedia Corp. Eicher's role in the magazine deepened as he worked on many science stories as well as observing pieces and by decade's end, the company moved to Waukesha, Wisconsin, 16 miles west of Milwaukee, and by that time Eicher was promoted to associate editor.[4] He also published his first books, The Universe from Your Backyard (a compilation of deep-sky observing stories first published in Astronomy), and Deep-Sky Observing with Small Telescopes, an anthology about clusters, nebulae, and galaxies. In 1992 the company decided to cease publishing Deep Sky. Although Eicher has stated that he enjoyed editing this smaller magazine, it became clear that to progress further on Astronomy, he had to give up the smaller journal. At its peak, however, and at the time of its discontinuance, Deep Sky swelled to a circulation of 14,000. Within a span of six weeks in 1996, Eicher was promoted successively to senior editor and then to managing editor. After six years as managing editor, in 2002, Eicher became Astronomy magazine's sixth editor in chief.[5]

Eicher frequently travels to speak on astronomy or view solar eclipses with tour groups. In 2013 he was invited to speak about great advances in astronomy and on comets at Harvard University, in the Phillips Auditorium of Harvard College Observatory.[6] He was among the 2014 speakers at the Starmus Festival in Tenerife, Canary Islands,[7] and spoke at Harvard again in the spring of 2016, as well as delivering a public talk at Lowell Observatory, Flagstaff, Arizona, in November 2016. In 2017 he spoke at the Science + Mathematics Think-in at WVIZ-PBS ideastream in Cleveland, Ohio.[8] He also spoke at the America's Darkest Sky Star Party at the Dark Sky New Mexico site near Animas, New Mexico in April 2017 and October 2017,[9] and in April 2018 delivered the Benson Memorial Lecture in Physics at Miami University in Oxford, Ohio.[10]

From 2011 through 2017, Eicher was president of the Astronomy Foundation.[11] the first ever trade association for the telescope industry. 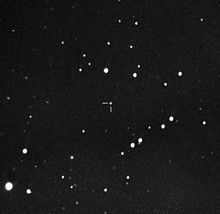 Asteroid 3617 Eicher (tick marks) imaged by Canadian astrophotographer Jack Newton on July 5, 2005, using a robotic telescope placed in Portal, Arizona. At this time the asteroid shone at magnitude 16.7 and was just south of the Virgo Cluster of galaxies.

Eicher's service to the astronomy world was recognized in 1990 when the International Astronomical Union named minor planet 3617 Eicher (discovery designation 1984 LJ) in his honor.[12] The asteroid, a main belt object in orbit between Mars and Jupiter, was discovered by astronomer Brian A. Skiff at Lowell Observatory's Anderson Mesa Station in 1984 and the citation was proposed and written by astronomer David H. Levy.

Eicher's books include COMETS! Visitors from Deep Space[13] a book with Brian May of Queen fame, and astronomer Garik Israelian, constituting the conference proceedings, lectures, and information from the first Starmus Festival, a science and music event held in 2011 in the Canary Islands.[14]

Beginning in 2013, he has been a blogger on astronomy and science topics for The Huffington Post.[15] In 2015 he joined the Asteroid Day movement as a 100x signatory and serves on that project’s board as Editor-in-Chief.] [16]

In May 2015 Eicher was named to the Board of Directors of the Starmus Festival.[17]

In 2017, Eicher started an audio podcast series “5 Questions with David Eicher,” which is hosted on the Astronomy Magazine website and features interviews about current scientific research with well-known astronomers, planetary scientists, and cosmologists.[20]

In June 2017, Eicher joined the Advisory Board of Lowell Observatory, in Flagstaff, Arizona.[21] Also in June 2017, Eicher attended and was a principal actor at the fourth Starmus Festival, which took place in Trondheim, Norway. Eicher served as host on the Festival's opening day, delivered two talks about galaxies, served as moderator and host of a panel discussing science education.[22]

Eicher has written eight books on the subject of the American Civil War, including Dixie Betrayed (Little, Brown), The Longest Night (Simon and Schuster),[23] Civil War High Commands (collabration with his father John H. Eicher),[24] and The Civil War in Books (Univ. of Illinois Press).

In 2013 Eicher donated his Civil War library of more than 4,000 volumes, collected since 1982, to the Ulysses S. Grant Presidential Library and Ulysses S. Grant Association at Mississippi State University.[25]

Eicher lives near Big Bend, Wisconsin, with his wife.[citation needed]

Eicher has been a drummer since grade school days in Ohio and currently plays with his band, the Astro Blues Band, in Wisconsin, which consists mostly of people who work with Eicher on Astronomy Magazine.[26]