Lowville /ˈlaʊvɪl/ is a town in Lewis County, New York, United States. The population was 4,982 at the 2010 census.[4] The town is near the center of the county and is southeast of the city of Watertown. The town of Lowville contains a village also named Lowville, which is the county seat. The town is named after Nicholas Low,[5] an early landowner. Low was of Dutch descent, and had emigrated with his wife and three small children from a rural village outside Amsterdam in 1778. Despite popular folk etymology, the name Lowville has nothing to do with its low elevation nor the lowing cattle of the many nearby dairy farms.

Settled in 1798 by a company from Westfield, Massachusetts, the town was formed in 1800 from the town of Mexico in Oswego County. In 1803, part of Lowville was used to form the town of Harrisburg. The village of Lowville was incorporated in 1854 and was designated the county seat in 1864, succeeding Martinsburg.

Perspective map of Lowville and list of landmarks from 1885 by L.R. Burleigh

Daniel Kelley, along with his six sons, settled in Lowville in 1798, moving from Middletown, Connecticut. With the help of others, Daniel put up a sawmill and a two-story house. One son, Datus, worked in the mill. In 1867, Datus' daughter Emeline (Kelley) Huntington wrote: "By a little brook which comes down from the long hills which rise almost like mountains on either side of the Black River, stands the same old mill where Father ground the wheat and corn for the country people. Its wheel is dripping and clattering still, doing duty as faithfully as of old. While the old miller who 'picked the stones and calked the gate' when the mill was new, has laid away his earthly casket in the little burying ground far away from the roar of the water which is constantly pouring over the mill dam."[citation needed]

Agriculture and dairy farming flourished in the Lowville area because of the rich soil on the Black River Flats. With the opening of the Black River Canal in 1851, the Rome, Watertown and Ogdensburg Railroad in 1867, and the Lowville and Beaver Railroad in 1906, industries flourished, including QubicaAMF (largest manufacturer of bowling pins in the world) and Kraft (the largest cream cheese plant in the country).[citation needed]

Dedicated in 2006, the Maple Ridge Wind Farm is one of the largest wind farms in the United States. The site has 195 wind turbines, with a total capacity of 320MW (equivalent to a mid-sized power plant). Maple Ridge (formerly Flat Rock Wind Farm) provides about $10 million in benefit to the local community, with about $2 million in annual payments to 75 landowners, and $8 million in tax revenues to the region. This site has increased New York's renewable energy generation by sixfold. The project is jointly owned by Iberdrola Renewables and EDP Renewables North America (formerly Horizon Wind Energy).[citation needed]

Peter Ostrum, who played the role of Charlie Bucket in Willy Wonka and the Chocolate Factory, lives in and practices veterinary medicine in Lowville.[6]

The Black River flows along the east side of the town.

There were 1,796 households out of which 32.6% had children under the age of 18 living with them, 52.3% were married couples living together, 9.9% had a female householder with no husband present, and 34.7% were non-families. 31.2% of all households were made up of individuals and 17.5% had someone living alone who was 65 years of age or older. The average household size was 2.42 and the average family size was 3.04.

Festivals and annual events in Lowville

Every year, there is a festival to celebrate the home of the World's Largest Cheesecake, made in Lowville, by Kraft.

Communities and locations in the town of Lowville 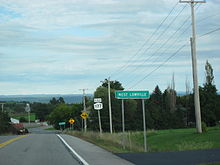