Skip to content
For other uses, see Artemas Ward (disambiguation).

Artemas Ward (November 26, 1727 – October 28, 1800) was an American major general in the American Revolutionary War and a Congressman from Massachusetts. He was considered an effective political leader, President John Adams describing him as "universally esteemed, beloved and confided in by his army and his country."[1]

Artemas Ward was born at Shrewsbury, Massachusetts, in 1727 to Nahum Ward (1684–1754) and Martha (Howe) Ward.[2] He was the sixth of seven children. His father had broad and successful career interests as a sea captain, merchant, land developer, farmer, lawyer and jurist. As a child he attended the common schools and shared a tutor with his brothers and sisters. He graduated from Harvard in 1748 and taught there briefly.[3]

The next year, 1751, he was named a township assessor for Worcester County.[7] This was the first of many public offices he was to fill. Ward was elected a justice of the peace in 1752 and also served the first of his many terms in the Massachusetts Bay Colony's assembly, or "general court."[5]

In 1755 the militia was restructured for the war, and Ward was made a major in the 3rd Regiment which mainly came from Worcester County.[8] They served as garrison forces along the frontier in western Massachusetts. This duty called him at intervals between 1755 and 1757, and alternated with his attendance at the General Court. In 1757 he was made the colonel of the 3rd Regiment or the militia of Middlesex and Worcester Counties.[9] In 1758 the regiment marched with Abercrombie's force to Fort Ticonderoga.[10] Ward himself was sidelined during the battle by an "attack of the stone."

By 1762, Ward returned to Shrewsbury permanently and was named to the Court of Common Pleas.[11] In the General Court he was placed on the taxation committee along with Samuel Adams and John Hancock. On the floor, he was second only to James Otis in speaking out against the acts of parliament. His prominence in these debates prompted the Royal Governor Francis Bernard to revoke his military commission in 1767.[12] At the next election in 1768, Bernard voided the election results for Worcester and banned Ward from the assembly, but this didn't silence him.[13]

In the growing sentiment favoring rebellion, the 3rd Regiment resigned en masse from British service on October 3, 1774. They then marched on Shrewsbury to inform Colonel Ward that they had unanimously elected him their leader. Later that month the governor abolished the assembly. The towns of Massachusetts responded by setting up a colony-wide Committee of Safety. One of the first actions of the Committee was to name Ward as general and commander-in-chief of the colony's militia.[14]

Following the Battle of Lexington and Concord on April 19, 1775, the rebels followed the British back to Boston and started the siege of the city. At first Ward directed his forces from his sickbed, but later moved his headquarters to Cambridge. Soon, the New Hampshire and Connecticut provisional governments both named him head of their forces participating in the siege. Most of his efforts during this time were devoted to organization and supply problems.

Additional British forces arrived in May, and in June, Ward learned of their plan to attack Bunker Hill. He gave orders to fortify the point, setting the stage for the Battle of Bunker Hill on June 17, 1775. Command during the battle devolved upon General Israel Putnam and Colonel William Prescott.[15]

After the British evacuation on March 17, 1776, Washington led the main army to New York City. Ward took command of the Eastern Department on April 4, 1776.[18] He held that post until March 20, 1777, when his health forced his resignation from the army.[19]

Even during his military service, Ward served as a state court justice in 1776 and 1777. He was President of the state's Executive Council from 1777–1779, which effectively made him the governor before the 1780 ratification of the Massachusetts Constitution. He was continuously elected to the Massachusetts House of Representatives for each year from 1779 through 1785. He also served as a delegate to the Continental Congress in 1780 and 1781.[20] Ward was the Speaker of the Massachusetts House in 1785.[21] He was elected twice to the United States House of Representatives, serving from 1791 to 1795.[22]

Ward died at his home in Shrewsbury on October 28, 1800, and is buried with Sarah in the town's Mountain View Cemetery.[23] His great-grandson, Artemas Ward wrote The Grocer's Encyclopedia (published in 1911).[24]

The Town of Ward, Massachusetts was incorporated in 1778 in honor of Artemas Ward. In 1837 the town was renamed to Auburn, Massachusetts after complaints from the U.S. postal service that the name Ward was too similar to the nearby town of Ware.[25]

Wards's lifelong home had been built by his father, Nahum, about the time Artemas was born. The home is now known as the Artemas Ward House and is a museum preserved by Harvard University. Located at 786 Main Street in Shrewsbury, Massachusetts it is open to the public for limited hours during the summer months.[26] 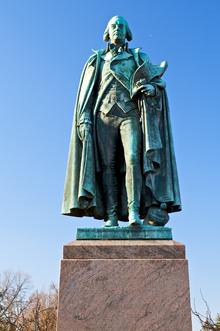 Ward Circle is a traffic circle at the intersection of Nebraska and Massachusetts Avenues in Northwest Washington, D.C. The land on three sides of Ward Circle is owned by American University. The circle contains a statue of Ward.[27]

The great-grandson of Ward gave over four million dollars to Harvard University on the condition that they erect a statue in honor of Ward, and maintain his home in Shrewsbury.[28] Harvard's initial offer in 1927 of $50,000 toward the statue was enough for a statue, but inadequate to provide the general with a horse.[29]

The statue was unveiled on November 3, 1938[30] by Maj. Gen. Ward's great-great-great-granddaughter, Mrs. Lewis Wesley Feick.[31] Although there are no crosswalks for pedestrian access to the circle, the base of the statue bears this inscription:[32]

American University named the Ward Circle Building, home of the American University School of Public Affairs, in honor of Artemas Ward, as it was the closest building at the time to Ward Circle. However, it was renamed to Kerwin Hall after their former president Cornelius M. Kerwin in June 2017.[33][34]