Skip to content
This article is about the librarian and explorer. For the Harvard Sanskrit scholar, see Charles Rockwell Lanman. 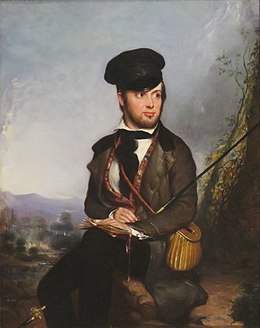 The Angler, a portrait of Charles Lanman by William James Hubard

Charles Lanman was born in Monroe, Michigan, on June 14, 1819, the son of Charles James Lanman, and the grandson of United States Senator James Lanman.[1]

Lanman's early life included newspaper work as editor of the Monroe Gazette in 1845, associate editor of the Cincinnati Chronicle in 1846, and member of the editorial staff of the New York Express in 1847.[2] He spent ten years, from 1835 to 1845, at The Hudson River School in New York City, where he met many artists, including Washington Irving. Lanman studied art under Asher B. Durand and at 28 became an elected associate of the National Academy of Design in 1846.

Lanman's career included service as librarian for the U.S. War Department, the U.S. House of Representatives, and the City of Washington Library; head of the returns office in the U.S. Interior Department; private secretary to Senator Daniel Webster; American secretary to the Japanese legation; and assistant assessor for the District of Columbia.

Lanman married in 1849[3]; they had no children. They raised Tsuda Ume (December 31, 1864 – August 16, 1929) from December 1871 to 1882. Ume had been sent by the Japanese government as part of the Iwakura Mission; one of its goals was to study educational systems in the U.S. Ume later founded Tsuda College for women in Tokyo.

Charles Lanman collected biographies of former and sitting Members of Congress for his Dictionary of the United States Congress, published by J. B. Lippincott & Co. in 1859. This eventually became the Biographical Directory of the United States Congress. Lanman's published writings include several collections of essays and books, including two biographies, The Private Life of Daniel Webster (New York and London, 1852) and Life of William Woodbridge (Washington, 1867).

Written accounts of his own travels and extensive explorations in the United States included:

He edited The Prison Life of Alfred Ely (New York, 1862), and The Sermons of Reg. Octavius Perinchief (2 vols., Washington, 1879). He also produced scientific articles such as "The Salmonidae of Eastern Maine, New Brunswick, and Nova Scotia".[8]

Lanman frequently exhibited paintings and sketches from nature in oil. He made “sketching trips” to every state east of the Rockies. Many of those early sketches were published in The Illustrated London News and in various American magazines. Among his pictures are Brookside and Homestead, Home in the Woods (1881), and Frontier Home (1884). He was called by Washington Irving "the picturesque explorer of the United States".[9]