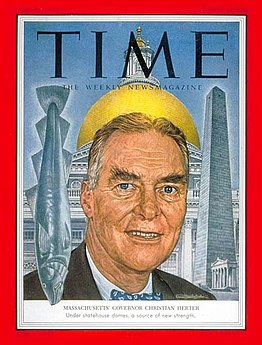 Christian Archibald Herter (March 28, 1895 – December 30, 1966) was an American Republican politician who was the 59th Governor of Massachusetts from 1953 to 1957 and United States Secretary of State from 1959 to 1961.[1] His moderate tone of negotiations was confronted by the intensity of Soviet leader Nikita Khrushchev in a series of unpleasant episodes that turned the Cold War even colder in 1960–61.

Herter was born in Paris, France, to American artist and expatriate parents, Albert Herter and Adele McGinnis, and attended the  [fr] there (1901–1904) before moving to New York City, where he attended the Browning School (1904–1911). He graduated from Harvard University in 1915 and did graduate work in architecture and interior design before joining the diplomatic corps in the following year.

Herter married the wealthy heiress Mary Caroline Pratt (1895–1980) in 1917. She was the daughter of Frederic B. Pratt, longtime head of the Pratt Institute and granddaughter of Standard Oil magnate Charles Pratt. They had three sons and one daughter, including Christian A. Herter, Jr., who was active in international relations.[1]

He was made attaché to the Embassy of the United States, Berlin, and he was briefly arrested while in Mainz as a possible spy. He was part of the US delegation to the 1919 Paris Peace Conference, where he helped draft the Covenant of the League of Nations. Later, he was the assistant to Herbert Hoover when he was instrumental in providing starvation relief to postwar Europe. Herter went on to work for Hoover when Hoover became Secretary of Commerce in the Harding Administration. Herter also participated in the 1919 meeting that resulted in the U.S. Council on Foreign Relations.

Herter hated working for the scandal-ridden administration of President Warren Harding, and returned to Boston, where he was a magazine editor and lecturer on international affairs.

In 1930, Herter was first elected to the Massachusetts House of Representatives and served for 12 years. In 1942, he sought the Massachusetts 10th district seat in the US House of Representatives, held by George H. Tinkham, whose isolationist views made him vulnerable during World War II. Once Herter entered the contest, Tinkham withdrew and so opened the way for Herter to be elected. Although he was critical of Franklin D. Roosevelt's New Deal, Herter distinguished himself from 1943 to 1953 primarily for his stand on foreign affairs, especially in the so-called Herter Committee[2] in 1947; its report initiated proposals that led to Harry Truman's Marshall Plan. In those years, he refused to support the permanence of the House Un-American Activities Committee. In 1947, Herter founded the Middle East Institute with Middle East scholar and then served on the board of trustees of the World Peace Foundation.

Herter was re-elected governor in 1954, defeating Massachusetts House Minority Leader Robert F. Murphy. He chose not to seek a third term in 1956.

On February 21, 1957, Herter was appointed Under Secretary of State for the second term of the Eisenhower administration; later, when John Foster Dulles became seriously ill, he was appointed Secretary of State, April 22, 1959. Dulles died a month later. Herter himself suffered from severe arthritis, forcing him to use crutches when walking.

Secretary of State Herter's main Cold War diplomatic challenges included escalating crises over the status of West Berlin in the Cold War; difficult negotiations with Soviet leader Nikita Khrushchev, especially regarding the Soviet downing of the U-2 spy plane; the collapse of the Paris Summit conference; and the early stages of American efforts to divert Fidel Castro's Cuban revolution away from communism. There were smaller crises around the world including a Civil War in the Congo. Herter's careful, cautious approach matched Eisenhower's preferences, emphasizing, negotiation in response to bellicosity from the Kremlin. Despite the soft language, Herter supported strong policies against Cuba, and a refusal to compromise on Berlin. After leaving office he chaired a blue ribbon committee on State Department personnel, and was one of President John F. Kennedy's representatives for trade negotiations.[3]

As an unemployed "elder statesman" after the election of 1960, Herter served on various councils and commissions, and was a special representative for trade negotiations, working for both John F. Kennedy and Lyndon Johnson until his death.

He died on December 30, 1966 at his home in Washington, DC, at the age of 71.[1] He is buried at the Prospect Hill Cemetery in Millis, Massachusetts.

Secretary Herter was also an active freemason. He was a member of the Grand Lodge of Ancient Free and Accepted Masons of the Commonwealth of Massachusetts.

Christian Herter's lifetime reputation was as an internationalist, especially interested in improving political and economic relations with Europe.

In 1943, with Paul Nitze (a distant cousin by marriage), Herter co-founded the School of Advanced International Studies (SAIS), which incorporated with the Johns Hopkins University in 1950.

In 1968, the American Foreign Service Association established its to honor senior diplomats who speak out or otherwise challenge the status quo. In 1948 Herter received an LL.D. from Bates College.

The ("WorldBoston" as of 2002), which Christian Herter helped organize in the 1940s, also has a honoring individual contributions to international relations.

The Christian A. Herter Memorial Scholarship Program is a sponsored by the Commonwealth of Massachusetts to recruit 10th and 11th grade students whose socio-economic backgrounds and environmental conditions may inhibit their ability to pursue higher education. Each year, 25 students in the 10th and 11th grades are selected to receive awards of up to 50 percent (50%) of their calculated need at the college of their choice within the continental United States.

Herter Park in the Brighton neighborhood of Boston, Massachusetts is named in Herter's honor. A University of Massachusetts Amherst building devoted to the teaching of history and other liberal arts is named "Herter Hall" after the statesman as well.

Herter was the last serving Secretary of State born in the 19th century.