Skip to content
American politician and lawyer
For articles on other people with the same name, see Dennis Moore (disambiguation).

Dennis Moore (born November 8, 1945) is an American politician and lawyer who served as a U.S. Representative for Kansas's 3rd congressional district, from 1999 until 2011. He is a member of the Kansas Democratic Party.

Moore was born in 1945 in Anthony, Kansas.[1] He attended the University of Kansas, from which he earned a bachelor's degree, and was briefly enrolled at Southern Methodist University. He received a Juris Doctor degree from Washburn University School of Law.

He served in the United States Army before becoming Assistant Kansas Attorney General. After a period in private practice, he was elected District Attorney in Johnson County, serving in that capacity from 1977 to 1989. While a defense attorney at the practice of Moriarty, Erker & Moore, Moore represented Debora Green when she was charged with murder in 1995. The case ended in 1996 with Green pleading no contest to the charges.[2][3]

Moore was first elected to the United States House in 1998, defeating the Republican incumbent, Vince Snowbarger. The district had traditionally elected moderate Republicans, but Snowbarger's unyielding conservatism caused many voters to shift to Moore. He thus became the first Democrat to represent the district in 37 years, after Democrat Newell A. George lost re-election to Republican Robert Fred Ellsworth, when it was the 2nd District. (It has been the 3rd District since 1963.)

Moore faced Republican Phill Kline in 2000, and narrowly held on to his seat, taking 50% of the vote. His margin of victory was fairly close due to George W. Bush's strong performance in the district. In 2002, he faced another close race, this time against moderate Republican Adam Taff, an airline pilot. In 2004, Moore defeated law professor Kris Kobach, another conservative, in the general election, with 55% of the vote.

In the 2006 Congressional election, Moore successfully defended his seat against Republican Chuck Ahner, winning with 64% of the vote, a much larger margin than he had in the past.

In August 2007, Republican State Senator Nick Jordan of Shawnee announced he would challenge Moore for the 3rd District seat in 2008. Moore defeated Jordan by a vote of 56% to 40%.

On November 23, 2009, it was reported that after six terms, Dennis Moore would not seek re-election in 2010, when he would turn 65 years old.[4] Moore's wife, Stephene Moore, was the Democratic nominee. She lost the election to Republican State Representative Kevin Yoder. The district was not represented by a Democrat again until 2019 when it was taken by Sharice Davids.

While in office Moore represented Kansas's 3rd congressional district, the state's smallest and most affluent, which includes most of the Kansas side of the Kansas City metropolitan area, including Kansas City, Overland Park, Olathe, Lenexa and De Soto. However, during his tenure the town of Lawrence was located in the third district but was later redistricted to the 2nd District.

Moore was the policy co-chair for the Blue Dog Coalition in the 110th Congress and a member of the New Democrat Coalition.

In 2005–2006, Representative Moore supported the interests of Citizens for Tax Justice, an organization supporting fair taxes for middle and low-income families and the closing of corporate tax loopholes, 83% of the time.[5]

In 2007, the National Taxpayers Union, an organization favoring a flat tax or a national sales tax, gave Representative Moore a rating of F for a 4% rating. The NTU explains "A score significantly below average qualifies for a grade of “F.” This failing grade places the Member into the “Big Spender” category."[6] Representative Moore supported the interests of the National Tax Limitation Committee 0 percent in 2007–2008.[7]

In 2007–2008 the Center for Security Policy, a Washington, D.C. think tank that focuses on national security issues, gave Representative Moore a rating of 25 percent. Their Congressional Scorecard cites Representative Moore for voting against the CSP position on 18 of 24 key votes. Specifically, Rep. Moore voted to limit Iraq war funding, limit surveillance to FISA guidelines, and voted against Missile Defense funding.[8] 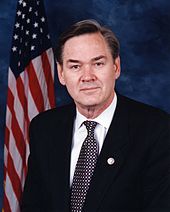 For 2007, with points assigned for actions in support of or in opposition to American Land Rights Association position, Representative Moore received a rating of 8 (out of 100). He received the 8% rating for voting on 11 of 12 key votes in opposition to the "Private Property Position".[14]

Through 2003, Representative Moore supported the interests of the Brady Campaign to Prevent Gun Violence 88% of the time.[15]

Representative Moore is pro-choice and has a 100% rating with NARAL.[18]

The environmental watchdog group League of Conservation Voters gave Moore a score of 92% for 2006, citing pro-environment votes on eleven out of twelve issues deemed critical by the organization. The League praised Moore for supporting right-to-know legislation regarding the Toxics Release Inventory program, the Clean Water Act, and energy and weatherization assistance for low-income families, as well as for opposing oil drilling offshore and in the Arctic National Wildlife Refuge, opposing salvage logging, opposing logging roads in Alaska's Tongass National Forest, and for opposing measures designed to expedite the production of new oil refineries.[21]

On February 8, 2012 Moore announced he had been diagnosed with Alzheimer's disease in its early stages. The diagnosis was made in June 2011 by St. Luke's Neuroscience Institute. Representative Moore's father was also afflicted with Alzheimer's. Moore now lives a peaceful life at a senior living facility in Overland Park, Kansas. He and his wife Stephene have been public about Moore’s diagnosis, and Stephene has become a national advocate for families struggling with Alzheimer’s Disease.[24]