Edward Hutchinson Robbins (February 9, 1758 – December 17, 1837) was an American lawyer and politician who served as the sixth Lieutenant Governor of Massachusetts from 1802 to 1806.

Robbins was born on February 9, 1758 in Milton, Province of Massachusetts Bay in what was then British America. He was the son of Rev. Nathaniel Robbins (1726–1795) and Elizabeth (née Hutchinson) Robbins (1731–1793). His mother was married to Caleb Chappel Jr. Among his siblings was Lydia Robbins and Nathaniel Johnson Robbins.

After his graduation, he became a lawyer, a delegate to the Massachusetts Constitutional Convention.[2]

On October 21, 1786, Robbins and his brother Nathaniel received a land grant for the purchase and settlement of lands in Passamaquoddy, now in Maine. The town of Robbinston on the St. Croix River was named in his honor.[2]

Robbins was a member of the Massachusetts House of Representatives and from 1793 until 1802, he was the Speaker of the House. From 1802 to 1806, Robbins served under Governor Caleb Strong as the sixth Lieutenant Governor of Massachusetts.[2]

In 1811, he was appointed judge of probate for Norfolk County.[2] 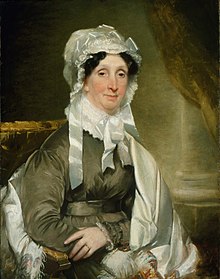 Portrait of his wife Elizabeth, by Chester Harding, 1827.

In 1785, Robbins was married to Elizabeth Murray (1756–1837), daughter of James Murray and Barbara (née Bennet) Murray.[3] Her sister, Dorothy "Dolly" Forbes, was married to Rev. John Forbes and was the mother of diplomat John Murray Forbes.[4] Together, Edward and Elizabeth were the parents of:[3]

In 1799, he was elected a Fellow of the American Academy of Arts and Sciences.[9]