In McCrary's first month in Congress, he received national attention for refusing to support an appropriation for a federal courthouse in Keokuk because the nation was in debt and he could not support such a courthouse in every district.[5] He published A Treatise on the American Law of Elections, in 1875.[3][6] In the 44th United States Congress, as a member of the United States House Committee on the Judiciary, he was the author of a farsighted (but unsuccessful) bill to reorganize the federal courts to enable reasonable and prompt judicial review.[7] He helped create the Electoral Commission to resolve the outcome of the 1876 Presidential Election, and served on the committee that investigated the Credit Mobilier scandal.[3] 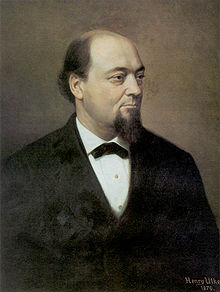 McCrary was the 33rd United States Secretary of War in the cabinet of President Rutherford B. Hayes from March 12, 1877, to December 11, 1879, when he resigned.[8] As Secretary, McCrary withdrew federal troops from the remaining reconstruction governments in South Carolina and Louisiana, and used federal troops in the 1877 railway strike and in Mexican border disturbances.[3] But the greatest military conflicts during his watch occurred in the American West, in battles with certain Native American tribes in Colorado, New Mexico, and elsewhere.[9]

McCrary was nominated by President Rutherford B. Hayes on December 1, 1879, to a seat on the United States Circuit Courts for the Eighth Circuit vacated by Judge John Forrest Dillon.[1] He was confirmed by the United States Senate on December 9, 1879, and received his commission the same day.[1] His service terminated on March 18, 1884, due to his resignation, which he attributed to his family's financial need after his many years of public service.[1][3][10]