The New-York Tribune was an American newspaper, first established in 1841 by editor Horace Greeley. Between 1842 and 1866, the newspaper bore the name New-York Daily Tribune.[1] From the 1840s through the 1860s it was the dominant Whig Party and then Republican newspaper in the United States. The paper achieved a circulation of approximately 200,000 in the 1850s, making it the largest daily paper then in New York City. The Tribune's editorials were widely read, shared, and copied in other city newspapers, helping to shape national U.S. opinion. It was one of the first papers in the north to send reporters, correspondents, and illustrators to cover the campaigns of the American Civil War.

In 1924, after 83 years of independent existence, the New-York Tribune merged with another major daily newspaper in New York City, the New York Herald, to form the New York Herald Tribune. The "Trib", as it was known, ceased publication in 1966.

Isidor Lewi served on its editorial board.[2]

Edgar Allan Poe's poem "Annabel Lee" was first published in the newspaper posthumously on October 9, 1849, in the obituary by Rufus Griswold entitled "Death of Edgar A. Poe".[3] Poe's poem "The Bells" was also published in the October 17, 1849, issue as "Poe's Last Poem".[4] 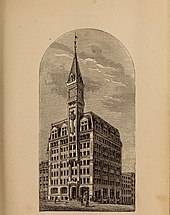 The New York Tribune building, today the site of One Pace Plaza in lower Manhattan.

The Tribune was created by Horace Greeley in 1841 with the goal of providing a straightforward, trustworthy media source. Greeley had previously published a weekly newspaper, The New Yorker (unrelated to the later modern magazine, of the same name), in 1833, and was also publisher of the Whig Party's political organ, Log Cabin. In 1841, he merged operations of these two publications into a new newspaper that he named, the New-York Tribune.[5]

Greeley sponsored a host of reforms, including pacifism and feminism and especially the ideal of the hard-working free laborer. Greeley demanded reforms to make all citizens free and equal. He envisioned virtuous citizens who would eradicate corruption. He talked endlessly about progress, improvement, and freedom, while calling for harmony between labor and capital.[6] Greeley's editorials promoted social democratic reforms, and were widely reprinted. They influenced the free-labor ideology of the Whigs and the radical wing of the Republican Party, especially in promoting the free-labor ideology. Before 1848 he sponsored an American version of Fourierist socialist reform, but backed away after the failed revolutions of 1848 in Europe.[7] To promote multiple reforms Greeley hired a roster of writers who later became famous in their own right, including Margaret Fuller,[8] Charles Anderson Dana, George William Curtis, William Henry Fry, Bayard Taylor, George Ripley, Julius Chambers and Henry Jarvis Raymond, who later co-founded The New York Times.[9] In 1852-62, the paper retained Karl Marx as its London-based European correspondent. Friedrich Engels also submitted articles under Marx's by-line.[10] Marx resented much of his time working for the Tribune, particularly the many edits and deadlines they imposed upon him, and bemoaned the "excessive fragmentation of [his] studies", noting that his work reporting on current economic events necessitated“ compelled to become conversant with practical detail which, strictly speaking, lie outside the sphere of political economy”. [11] Engels wrote “It doesn’t matter if they are never read again.”. In the same correspondence Marx disparagingly referred to the publication as a “blotting paper vendor”. Nevertheless, Engels still cited this career as a positive achievement of Marx’s during a eulogy given at his funeral. [12] [13]

Founded in a time of civil unrest, the paper joined the newly formed Republican Party in 1854, named it after the party of Thomas Jefferson, and emphasized its opposition to slavery. The paper generated a large readership, with a circulation of approximately 200,000 during the decade of the 1850s. This made the paper the largest circulation daily in New York City — gaining commensurate influence among voters and political decision-makers in the process.[14] During the Civil War Greeley crusaded against slavery, lambasting Democrats while calling for a mandatory draft of soldiers for the first time in the U.S. This led to an Irish mob attempting to burn down the Tribune building in lower Manhattanan during the Draft Riots.[15]

Greeley ran for president as the nominee of the Liberal Republican Party (and subsequently the Democratic Party) in the 1872 Election, against incumbent Ulysses S. Grant, in his bid for a second term. Greeley was unsuccessful, and soon after the defeat, checked into Dr. George C.S. Choate's Sanitarium where he died only a few weeks later. Tribune editor Whitelaw Reid purchased the paper following Greeley's death.

In 1886, with Reid's support, the Tribune became the first publication in the world to be printed on a linotype machine, which was invented by a German immigrant, inventor Ottmar Mergenthaler. This technique allowed them to exceed the standard newspaper size of only eight pages while still speeding up printing time per copy, thereby increasing the overall number of copies that could be printed.

A "new" New York Tribune debuted in 1976 in New York City. The paper, which was originally named The News World and later changed to The New York City Tribune, was published by News World Communications, Inc., owned by the Unification Church. It was published in the former Tiffany and Company Building at 401 Fifth Avenue until it printed its last edition on January 3, 1991.[16] Its sister paper, The Washington Times, is circulated primarily in the nation's capital. The Tribune carried an expansive "Commentary" section of opinions and editorials. Former New York City Mayor Ed Koch was one of the columnists.

Copies of the New-York Tribune are available on microfilm at many large libraries and online at the Library of Congress.[17] Also, indices from selected years in the late nineteenth century are available on the Library of Congress' website. The original paper articles from the newspaper's morgue are kept at The Center for American History at the University of Texas at Austin.