Newton North High School, formerly Newton High School, is the larger and longer-established of two public high schools in Newton, Massachusetts, the other being Newton South High School. It is located in the village of Newtonville. The school from 2009 to 2010 underwent controversial reconstruction of its facility, making it one of the largest and most expensive high schools ever built in the United States, with a price tag of nearly US$200 million.[2][3] The new building opened for classes in September 2010.

In the 1850s, high school classes in Newton were conducted in buildings shared with grammar schools in the villages of Newton Centre, West Newton, Upper Falls, and Newton Corner. In 1859, Newton's population topped 8,000 residents for the first time, a threshold that required the town under Massachusetts state law to construct a separate high school. Newton High School's first principal was J.N. Beals, for whom the current Beals House was named. Beals also served as one of the new school's two teachers, along with Amy Breck. Beals left the job for health reasons after only one year and was replaced by E.D. Adams, for whom the current Adams House was named.[4] 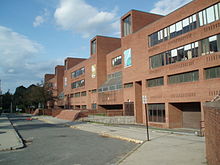 The old building at 360 Lowell Avenue

By 2003, the "old" Newton North building was 30 years old and aging poorly, with leaks, poor ventilation and crumbling stairs. After extensive community debate and a citizen review panel, a decision was reached to construct a replacement high school, with the final cost ultimately totaling $197.5 million, making it one of the most expensive high schools ever built in the state. A project consultant explained that the project's relatively high cost was partly due to demolition of the existing 450,000-square-foot (42,000 m2) building, hazardous material abatement in the existing building, and the new school's complex program, which includes a natatorium, vocational technology education program, and culinary arts facilities.[citation needed]

At a public hearing in June 2006, community residents criticized the plan for its cost and for creating a new four-way intersection at Walnut Street and Trowbridge Avenue. Others claimed the proposed north-south orientation and lack of a basement level would waste energy as compared to the current structure.[5] Nonetheless, after a public referendum and vote in January 2007, Newton residents approved the current plan for a new building.

Gund Partnership designed the new building, and Dore and Whittier Architects was the Architect of Record. Dimeo Construction Company was the construction manager and general contractor for the project.[6] The removal of the asbestos, laden throughout the existing building, was priced at $10 million.[7] The building was dismantled, with contaminated construction debris packaged in lined cardboard boxes and shipped out in 650 trailer loads.[8] 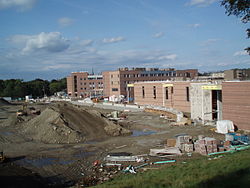 The construction site of the new Newton North in September, 2009

The new building is oriented on a north–south axis on the eastern side of the current lot, with athletic fields to the west and a soccer field on the east side. The main entrance has returned to Walnut Street, as was the case from 1859 to 1973. The new building places the school office in a more accessible location – it was on the third floor in the old building – and ensures that most classrooms have natural light and windows to the outside.[9]

The 413,000-square-foot (38,400 m2) school incorporates many features that improve energy efficiency, and is among the first LEED-certified schools in the state.[10] Green features include rooftop solar panels, systems to reuse rainwater, interior materials with low emission of volatile organic compounds, and occupancy motion sensors. Unlike the previous school building, where 50 percent of the classrooms did not have windows or access to daylight, classrooms in the new school receive natural light; light fixtures are dimmed based on the amount of daylight to conserve energy.

The school is divided into administrative units called "Houses". Each has its own office, secretary, and Dean (formerly "Housemaster"), who deals with administrative and disciplinary matters for house students. The House system was designed to provide better communication, distributed administration, more personal attention to individuals, a smaller peer group for students, more practical social events, and intra-house athletic teams.[citation needed] The houses are Adams, Barry, Beals and Riley, with each year group occupying one house. In the period of its largest population (≈3,000 students in the 1960s and later), there were six houses – the two additional houses being Bacon and Palmer – which also contained student common rooms and teachers' lounges. Originally, students in the same class were broken up into different houses; now the four houses correspond to the four grade levels. Students remain in the same house throughout their four years at Newton North. Houses are named for notable former principals, such as J.N. Beals and E.D. Adams.

During the academic year of 2009/2010 a Greengineering course was added in the Career and Tech. Ed. Department at Newton North High School. The course taught students how to produce biodiesel, make fused plastic bags, and grow algae that would later be processed into fuel. The biodiesel was sold to a recycling company as well as the community at large. This program was the first of its kind in both Massachusetts and the United States.[12] Greengineering was renewed for the academic year of 2010/2011 with additions to curriculum for Greengineering 101 and a new Greengineering 201 course. They had started creating a styrofoam type material using mycelium. They planned to use it to replace the need for non-green styrofoam and to create a surfboard made of fiberglass-coated mycelium. During the 2016-2017 school year, Greengineering had multiple new subject areas including pedal power and aquaponics. However in the beginning of the 2018 school year, Greengineering came to an end and was replaced with a new Sustainability course.[citation needed]

Award plaque of NNHS' History Team from the 2019 History Bowl. The team has received other plaques, including a first place plaque from the New Hampshire regional tournament.

In the 2011–2012 school year, the science team placed first at MIT Trivia, Envirothon, and JETS. In 1993 the team's Science Bowl division won the state championship and placed 3rd nationally. They won the Science Olympiad State competition in 1995, 2004, 2007, 2008, and 2009, and have represented Massachusetts at the national competition.[citation needed]

The Chess Club has sent teams of four players to the tournament yearly for the past two decades. The school team won the championships in 2002, 2009, 2010, and 2012.[14] In 2016 they placed second to two-time champions Lincoln-Sudbury Regional High School. In 2018 they once again placed second after losing in the final round to the eventual champions BBN, 1.5 -2.5. The last time an individual player has won the state title was Jacob Fauman in 2012.[15] The current school team has top 50 nationally ranked chess players in their age group and top 25 finishers at the last national grade championships. The club itself has USCF Club affiliation and a Club TD (who is a student), something that no other high school in Massachusetts has.[citation needed]

Newton North has a long-running student government system, which includes a president and multiple vice-presidents of each class, as well as the Student-Faculty Administration, a liaison between students and teachers. In the school year, 2020 - 2021 the class of 2024 student government was the only grade to have elections by submitting a speech video. The class also had a record high of candidates for the election with 38 kids running.[citation needed]

Newton North publishes a monthly student newspaper, The Newtonite, founded in 1922. The paper has a circulation of 2000 issues. Students contribute to the paper through credited journalism courses. The Newtonite has won crowns from the Columbia Scholastic Press Association – the Gold Crown in 2001, and the Silver Crown in 2002 – among other scholastic journalism awards.[16] Students also design and publish The Newtonian, the school's yearbook, which printed its 101st edition in 2011. Thoughtprints, published once a year, is the school's student-run literary magazine, featuring only student submissions. In 2010, the magazine included a CD of student-written music for the first time.

Tiger Magazine is Newton North's video production class' monthly cable television program. It airs on Newton's NewTV local cable station. The content of the program is generally a mixture of comedy pieces, news, and community based documentary, as well as experimental and dramatic video works. Several Tiger Magazine alumni have gone on to pursue careers in the film industry, and numerous pieces originally aired on Tiger Magazine have won awards in local and national video contests.[citation needed] Near the end of the 2011–2012 school year, the name of the show was changed to Tiger Tube.

Newton North competes in the Bay State League with other suburban Boston public schools. Since 1894, the boys' football team has played rival Brookline High School in the traditional Thanksgiving Day game. This is one of the oldest high school football rivalries in Massachusetts.[citation needed]

The track teams at Newton North have remained some of the top teams in the state since the inception of state-level competition. Beginning with Newton High School's first state title in 1922, the boys' track teams have won the Division I / Class A state championship 24 times outdoors and 15 times indoors, including Newton High School's record streak of eight in a row (1952–1959). Massachusetts added an additional all-state meet including all divisions in the 1960s outdoors and 1980s indoors; Newton North has subsequently won all-state titles in 1977, 2002, 2004, 2005, 2013, 2016, 2017 and 2018.[17] The 2004/2005 season featured both Division I and All-State titles in cross-country, indoor track, and outdoor track which completed a "Triple Crown" of championships. That year also featured a victory at the Penn Relays in the high school distance medley championship, which was the first relay victory by a Massachusetts high school in almost 50 years. In 2011, the Newton North sprint medley relay team and its four members were named All-American by the National Scholastic Sports Foundation.[18] Newton High/Newton North athletes have won a high school national title (Warren Wittens in the 1936 intermediate hurdles; Carla Forbes in 2012 in the long jump and triple jump;[19] Nick Fofana in 2014 in the decathlon[20] Andrew Mah in 2018 in the 5000[21]), an NCAA title (Carl Shine in the 1959 shot put), and run a four-minute mile equivalent (Tom Carleo ran 3:41 for 1500 and competed at the 1988 Olympic trials).

Theatre Ink is Newton North's theater department.[22] Students work as directors, stage managers, student producers, and designers, and in backstage roles, in addition to onstage roles.[23] All sets, lights, and sound for productions are designed, built, and operated by students.[23] Theatre Ink uses two performance spaces, the Performing Arts Center, which is a standard proscenium theatre and seats approximately 600, and the little theatre,[24] a roughly 200-seat theatre-in-the-round.

A typical season has several productions:

Inducted to the Newton Public Schools athletic hall of fame.[36]
Note: Alumni who graduated prior to 1974 are graduates of Newton High School.