Skip to content
"Pro-life" redirects here. For the right to life as a concept, see Right to life. For the person formerly known as Marvin Richardson, see Pro-Life (politician).
Movement that believes abortion should be illegal

Abortion is the ending of a pregnancy by removal or expulsion of an embryo or fetus.[note 1]

Each Life Matters demonstration in Madrid, Spain, on 17 October 2009

In Europe, abortion law varies by country, and has been legalized through parliamentary acts in some countries, and constitutionally banned (or heavily restricted) in others. In Western Europe this has had the effect at once of both more closely regulating the use of abortion, and at the same time mediating and reducing the impact anti-abortion campaigns have had on the law.[1]

The first specifically anti-abortion organization in France, Laissez-les-vivre-SOS futures mères, was created in 1971 during the debate that was to lead to the Veil Law in 1975. Its main spokesman was the geneticist Jérôme Lejeune. Since 2005, the French anti-abortion movement has organized an annual March for Life.[2]

The 1920 abortion laws of France have not been entirely repealed leading to ambiguity in the nation's policies.[3] By 1975, Simone Veil, the minister for health, introduced legislation that specifically in cases of distress "tolerated" abortion up to ten weeks.[4] Abortions after this date are only cleared by the government if the pregnancy endangers the health of the woman or will result in the birth of a child with a severe and incurable disease.[4] After twelve weeks, abortion, except for "therapeutic abortion, under the terms of Article 317 of the Criminal Code, is a crime, punishable by 6 months to 10 years in prison, a fine of between 1800 and 250,000 Francs, and loss of professional license."[4]

Catholics and right-wing political groups continue to protest abortion. The Front National, an extreme right-wing anti-immigration party led by Jean-Marie Le Pen, has attempted to decrease to funding of abortions unsuccessfully even though they have around 10% of the French electorate.[3]

Main article: Abortion in the Republic of Ireland

There are several major anti-abortion groups in the Republic of Ireland, Pro Life Campaign, Youth Defence and Iona Institute. Despite the 1967 Abortion Act which was a significant landmark for women in the UK, it did not apply to Northern Ireland. These women either had to travel to the mainland to receive medication or face criminal charges for purchasing abortion pills illegally.[5]

In Liechtenstein, an application to legalize abortions was rejected by a slim majority in a referendum in 2011. The opponents, which included Prince Alois, got 500 votes more and eventually settled at 52.3 percent compared with 47.7 percent.[6]

Prince Alois had announced the use of his veto in advance if necessary to prevent the introduction of abortion.[7]

In Spain, over one million demonstrators took part in a march in Madrid in October 2009 to protest plans by the government of José Luis Zapatero to legalize elective abortions and eliminate parental consent restrictions.[8]

In 2010 1,067,315 Spaniards signed a petition against the liberal abortion policy of the government. The petition was launched by the organizations "Derecho a vivir" (right to life) and "Hazteoir" (make yourself heard).[9] Hazteoir is connected to the right-wing party Vox, whose leader Santiago Abascal is a Hazteoir member.[10]

Gift of Life is a medical and anti-abortion charity in Ukraine.[11]

In the United Kingdom, the most prominent anti-abortion organization is the Society for the Protection of Unborn Children. It was formed at the time of the passage of the 1967 Abortion Act which liberalized abortion law. The group campaigns against abortion, often using questionable claims,[12] and supports protests at pregnancy clinics.[13] The Anti-Abortion Act of 1967 had significant effect in Britain (excluding Northern Ireland). Rather than overturning the existing law, the act states that if at least two doctors deemed the reasons for abortion in alignment with the Act, it could legally be performed. This still meant that the punishment for women who obtained abortions contrary to the act were faced with potential life imprisonment. Doctors too could be prosecuted if they were found administering abortions without reasonable cause.[5] To this day, there are many clinics in the UK that anti-abortion activists routinely stand outside; their goal being to discourage the women entering from having their abortions. This is through two processes known as "prayer vigils" which are sometimes whispered quietly and other times said aloud to actively dissuade, and "pavement counseling" where activists approach entering women to persuade them to continue with their pregnancies. This is a practice held in low regard by women who seek abortions and the organisations providing the service as it has been known to cause anxiety and distress.[5]

In Israel, the major anti-abortion organization is Efrat.[14] Efrat activists primarily raise funds to relieve the "financial and social pressures" on pregnant women so that they will not terminate their pregnancies. However, this activity is only carried out in the Jewish sector in Israeli society, as Efrat officially views abortion among Jews as a demographic threat to the Jewish people.[15] 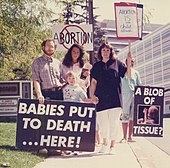 The United States anti-abortion movement formed as a response to the landmark 1973 Roe v. Wade and Doe v. Bolton Supreme Court decisions, with many anti-abortion organizations having emerged since then. There is also a smaller consistent life ethic movement, favoring a philosophy which opposes all forms of killing, including abortion, war, euthanasia, and capital punishment.

The current movement is in part a continuation of previous debates on abortion that led to the practice being banned in all states in the late 19th century. The initial movement was led by physicians, but also included politicians and feminists. Among physicians, advances in medical knowledge played a significant role in influencing anti-abortion opinion. Quickening, which had previously been thought to be the point at which the soul entered a human was discovered to be a relatively unimportant step in fetal development, caused many medical professionals to rethink their positions on early term abortions.[16] Ideologically, the Hippocratic Oath and the medical mentality of that age to defend the value of human life as an absolute also played a significant role in molding opinions about abortion.[16]

Meanwhile, many 19th-century feminists tended to regard abortion as an undesirable necessity forced upon women by thoughtless men.[17] The "free love" wing of the feminist movement refused to advocate abortion and treated the practice as an example of the hideous extremes to which modern marriage was driving women.[18] Marital rape and the seduction of unmarried women were societal ills which feminists believed caused the need to abort, as men did not respect women's right to abstinence.[18]

Due to the conservative prime minister,[who?] Canada has kept the debate of abortion on hold.[when?][according to whom?] Since the 1980s, at least forty-three private member bills that are against abortion have been sent to the House of Commons yet none of them have been passed.[3] In the studies done the anti-abortion laws in Canada, numerous factors show the differences between the past views of anti-abortion and current arguments. Canadian anti-abortion discourse increasingly "(a) focuses beyond legislative change for its objectives; (b) is adopting a "pro-women" tone; (c) avoids public appeals to relation to ground its position; and (d) employs new explicit arguments (the abortion-harms-women argument) and revises older ones (the older fetal-centric argument) in ways that change to perspective towards more modern, and pro-women views than the prior."[19]

There have been two national anti-abortion March for Life rallies that have gathered over 10,000 protesters at Parliament Hill.[19] At these protests, thousands gathered in attempts to create enough commotion to enact change. In addition to the national protests, anti-abortionists still protest abortion clinics across the nation in attempts to stop abortions from continuing.[19]

In South Africa there is an anti-abortion organization called Pro-Life Generation.[21][third-party source needed]

When considering the anti-abortion laws of Australia, it is important to look with an international lens as a large portion of Australian law is derived from the British law.[23] Until 1967, British law states that "an induced abortion is unlawful in all situations save the (probable) exception of situations where it is necessary to save the life of the mother."[24] Australia partook of this law until Britain changed it in 1967 towards a more liberal standpoint.[24]

About twenty-two per thousand women aged between fifteen and forty-four have an abortion each year which causes great unrest with the anti-abortionists of Australia.[23] Throughout Australia, specifically in Victoria and Queensland, numerous anti-abortions lobbying and protesting took place. In Brisbane in 1985, the police raided an abortion clinic and successfully took the records of the women being treated there.[24] With this breach of privacy, many gathered in attempt to gain political support to end the raids. Within the government there is also said to be seen a loosely banded group of anti-abortion politicians that attempted to deny government rebates for terminations but was denied due to its need of clarification.[24]

Abortion is legal in Russia as an elective procedure up to the 12th week of pregnancy, and in special circumstances at later stages.[25] The abortion issue gained renewed attention in 2011 in a debate that The New York Times says "has begun to sound like the debate in the United States".[26] Parliament passed and President Dmitri Medvedev signed several restrictions on abortion into law to combat "a falling birthrate" and "plunging population".[26] The restrictions include requiring abortion providers to devote 10% of advertising costs to describing the dangers of abortion to a woman's health and make it illegal to describe abortion as a safe medical procedure. Medvedev's wife Svetlana Medvedeva has taken up the anti-abortion cause in Russia in a weeklong national campaign against abortion called "Give Me Life!" and a "Day of Family, Love and Faithfulness" by her Foundation for Social and Cultural Initiatives in conjunction with the Russian Orthodox Church.[26]