Roger Wayne Marshall (born August 9, 1960) is an American politician who is the junior United States Senator from Kansas, having been elected to succeed Pat Roberts in 2020. A member of the Republican Party, he previously served as the U.S. Representative for Kansas's 1st congressional district in 2017-2021, a mostly rural district covering much of the western and northern parts of the state.

An obstetrician, Marshall was first elected to Congress in 2016 after defeating incumbent Tim Huelskamp in the Republican primary. On September 7, 2019, he announced his bid for the United States Senate in the 2020 election; he sought the seat being vacated by Pat Roberts. Marshall won the Republican primary on August 4, 2020 and was elected on November 3, 2020. Marshall took the oath of office as a Senator on January 3, 2021.

In January 2021, Marshall joined a group of Republican senators, led by Josh Hawley and Ted Cruz in an unsuccessful effort to overturn the results of the 2020 presidential election.[1] On January 6, Marshall voted in support of the objection to the electoral votes for Pennsylvania and Arizona, both of which were overwhelmingly rejected by the Senate, 92-7 and 93-6 respectively.[2][3]

Marshall was born in El Dorado, Kansas.[4] He attended Butler Community College[5] before attending Kansas State University, where he received a bachelor's degree in biochemistry and was a member of Beta Theta Pi.[6] He received his Doctor of Medicine from the University of Kansas. He completed a residency in obstetrics and gynecology at Bayfront Medical Center in St. Petersburg, Florida.[7]

Marshall has served as chairman of the Board of Great Bend Regional Hospital and has been a district governor of Rotary International. He also served seven years in the United States Army Reserve reaching the rank of captain.[8] 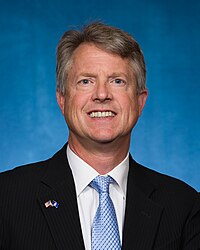 Marshall ran against incumbent Tim Huelskamp in the Republican Party primary election for Kansas's 1st congressional district in the United States House of Representatives. Marshall ran with the support of many of the state's agricultural groups, who were angered at Huelskamp losing his seat on the House Agriculture Committee, the first time in a century that a Kansan had not been on that panel.[9] During the primary, Huelskamp's campaign ran TV ads criticizing Marshall for a confrontation with a neighbor in 2008 in connection with a land dispute; the neighbor made a 9-1-1 call accusing Marshall of attempting to run him over with a vehicle.[10] Marshall ultimately pleaded no contest to a reckless driving misdemeanor and settled a civil suit brought by the neighbor.[10]

On August 2, 2016, Marshall defeated Huelskamp in the Republican primary, 56 percent to 44 percent. No Democrat filed to run in the heavily Republican district.[11]

In the general election, Marshall won handily, defeating independent Alan LaPolice and Libertarian Kerry Burt with 65.9 percent of the vote.

Marshall's candidacy was endorsed by the United States Chamber of Commerce, the Kansas Livestock Association, the National Association of Wheat Growers, and the Kansas Farm Bureau, an affiliate of the American Farm Bureau Federation.[11][12]

Marshall was sworn into office on January 3, 2017.[citation needed]

On October 23, 2019, Marshall was part of a group of about 15–30 House Republicans, led by Representative Matt Gaetz, who intruded upon that day's confidential hearing of the House Intelligence Committee. The Republican and Democratic committee members were meeting in a Sensitive Compartmented Information Facility (SCIF) to hear testimony from Deputy Assistant Secretary of Defense Laura Cooper in connection with the impeachment inquiry against Donald Trump.[13] Marshall was one of a group of Republicans that followed Gaetz to the hearing room.[14] Marshall called the impeachment inquiry a "sham" and contended that "the people of Kansas are sick and tired of these impeachment hearings."[14]

In September 2019, Marshall announced he would give up his House seat and run for the Senate seat being vacated by four-term fellow Republican Pat Roberts.[15] In the Republican primary election, Marshall faced Kris Kobach, a polarizing ex-Kansas Secretary of State and Donald Trump ally,[16] known for his far-right views.[17] Senate Republican leaders, fearing that the nomination of Kobach would endanger their majority in the Senate,[16][17] urged Trump to endorse Marshall; Trump did not do so.[16] The U.S. Chamber of Commerce, the Kansas Farm Bureau and several anti-abortion organizations supported Marshall.[16] The National Republican Senatorial Committee launched a major voter contact effort ("Operation Scorched Prairie") on Marshall's behalf making 2.3 million unique voter contacts via text and robocalls in the week before the election.[16]

The rival campaigns and outside groups (super PACs) spent millions in attack ads; the primary was anticipated to be close, but Marshall ultimately won by 14.2% with 40.3% of the total votes, although the second-place finisher (Kobach) and third-place finisher (Kansas City based plumber Bob Hamilton) combined for a higher total, on August 4, 2020.[18][19] Marshall won all but one county west of Emporia. In Sedgwick County, in which Wichita is located, he beat Kobach 47% to 26%. He lost by a majority in Wyandotte County, where Kansas City, Kansas is located, and by pluralities in most counties in eastern Kansas.[18] Marshall faced and defeated Democratic State Senator Barbara Bollier in the general election.[20]

2021 Electoral College count and storming of the U.S. Capitol

Marshall opposed the results of the 2020 presidential election, claiming in "several states" "governors, secretaries of states and activist courts" usurped legislatures to create voting rules. Therefore, he announced that he would oppose the certification of the Electoral College count slated to take place on January 6, 2021. He would also call for an electoral commission to investigate "the integrity of the ballot, to hold states accountable to the time proven constitutional system of the Electoral College."[21]

He was participating in the certification of the Electoral College count when the 2021 storming of the United States Capitol happened. He blamed "the rioters, vandals, and trespassers" with destroying "any chance we had for peaceful discussion and debate on restoring and ensuring confidence in this and all future elections." He also called for participants to be "prosecuted to the fullest extent."[22]

After the Capitol was secure, Marshall joined the Senate to continue the vote on the certification. Marshall supported the objections to the electoral votes for Arizona and Pennsylvania. The Senate rejected these objections by 93-6 and 92-7 respectively.[23] He called his decision to object to the count as being "from my heart." Afterwards, he acknowledged, for the first time, that Joe Biden would be president.[22]

As a result of his refusal to certify the count, the Kansas Democratic Party called for his expulsion from congress for failure to “execute [his] oath of office to support and defend the United States Constitution”.[24] Additionally, the McPherson Sentinel editorial board wrote that Marshall "should be ashamed" for his decision to support false claims of voter fraud and trying to overthrow the election.[25]

Marshall is a Donald Trump loyalist, voting in line with the president's position 98% of the time.[26][27]

Marshall opposes abortion, including in cases of rape and incest.[28][29][30] In 2020, he called for overturning Roe v. Wade, the Supreme Court decision that affirmed a woman's right to an abortion.[28]

Regarding medical marijuana, Marshall said in 2017, "I'm not convinced that it's medically proven and a good idea... I think there's a path there, but I just haven't seen enough scientific data to say it's a good thing."[31]

During the COVID-19 pandemic, Marshall has promoted conspiracy theories which falsely suggested that the Centers for Disease Control and Prevention were inflating coronavirus death numbers. Facebook removed Marshall's posts from its platform as a violation of its rule against "harmful misinformation."[32] Marshall said that Facebook's removal of his misinformation was "corporate censorship."[33][34]

Marshall does not argue against the effectiveness of masks to halt the spread of the coronavirus but he opposes face mask mandates.[35][36] He has appeared at indoor campaign events without wearing a face mask before maskless crowds that did not observe social distancing.[37][35][38]

During the pandemic, he promoted prophylactic use of hydroxychloroquine, an antimalarial drug promoted by Trump, despite the drug being unproven as an effective treatment against the coronavirus and despite government warnings about using it outside of hospital or research settings.[39] He said he himself used the drug to proactively guard against the coronavirus.[39]

Marshall rejects the scientific consensus on climate change, saying "I'm not sure that there is even climate change."[40][26] Marshall has criticized the Environmental Protection Agency and supports reducing its authority.[29] Marshall supports the federal renewable fuel standard, which requires corn-based ethanol to be blended with gasoline.[41] Marshall supported Trump's decision to withdraw the U.S. from the Paris climate accord.[40]

Marshall supports repealing the Patient Protection and Affordable Care Act (the ACA or "Obamacare").[42] Marshall voted in favor of the American Health Care Act of 2017 which would have repealed and replaced the ACA.[43] In 2020, he continued to campaign on repealing and replacing the ACA.[44]

Marshall opposes Medicaid expansion in Kansas.[44] He says he "measures success in how many people can afford to leave the Medicaid program and enter the private insurance market."[42] In explaining his opposition to Medicaid expansion, Marshall said in an interview in March 2017 that some people "just don't want health care." His remarks attracted criticism; Marshall said they were taken out of context and cited his work as a doctor at a free family planning clinic which he said was the only clinic in the area to accept Medicaid.[42][45][46][44]

Marshall, who represents a rural district, supports farm subsidies, such as federal crop insurance. Marshall's support for subsidies gained him the 2016 endorsement of the Kansas Farm Bureau in the Republican primary, in which he prevailed over Representative Tim Huelskamp.[47][48]

Marshall supported President Donald Trump's Executive Order 13769, which barred the nationals of seven Muslim-majority nations from entering the United States.[50] Marshall supports an immigration bill with a pathway to citizenship for people not living in the US legally.[41][51]

In December 2020, Marshall was one of 126 Republican members of the House of Representatives who signed an amicus brief in support of Texas v. Pennsylvania, a lawsuit filed at the United States Supreme Court contesting the results of the 2020 presidential election, in which Joe Biden prevailed[52] over incumbent Donald Trump. The Supreme Court declined to hear the case on the basis that Texas lacked standing under Article III of the Constitution to challenge the results of the election held by another state.[53][54][55]

House Speaker Nancy Pelosi issued a statement that called signing the amicus brief an act of "election subversion." Additionally, Pelosi reprimanded Marshall and the other House members who supported the lawsuit: "The 126 Republican Members that signed onto this lawsuit brought dishonor to the House. Instead of upholding their oath to support and defend the Constitution, they chose to subvert the Constitution and undermine public trust in our sacred democratic institutions."[56][57]

Marshall lives in Great Bend, Kansas, where he practiced medicine.[58] He and his wife, Laina, have four children.[59]

On January 31, 2018, Marshall was a passenger on a chartered Amtrak train involved in the 2018 Crozet, Virginia train crash. He administered first aid and CPR to the injured.[60][61]