William Edward Miller (March 22, 1914 – June 24, 1983) was an American politician who served in the United States House of Representatives from New York as a Republican. During the 1964 presidential election he was the Republican nominee for vice president, the first Catholic nominated for the office by the Republican Party.

A native of Lockport, New York, Miller graduated from the University of Notre Dame in 1935 and Albany Law School in 1938, afterwards becoming an attorney in Lockport. In 1942 he was appointed a commissioner for the U.S. District Court in Buffalo, New York. Miller served in the United States Army during World War II, first as a member of an Intelligence unit in Richmond, Virginia, and then as a prosecutor of Nazi war criminals during the Nuremberg trials.

In 1950, Miller was a successful Republican candidate for the United States House of Representatives. He was reelected six times, and served from January 1951 until January 1965. In 1960 he was selected to lead the National Republican Congressional Committee, and led Republicans to gain more than 20 seats in that year's elections. In 1961 he became chairman of the Republican National Committee, a position he used to advocate for the party to become more conservative. In 1964, Miller was selected as the Republican nominee for vice president. The ticket of Senator Barry Goldwater and Miller for vice president lost to the Democratic nominees, President Lyndon Johnson and Senator Hubert Humphrey.

After leaving Congress, Miller resumed practicing law in Lockport. He died in Buffalo on June 24, 1983 and was buried at Arlington National Cemetery.

William Edward Miller was born on March 22, 1914, in Lockport, New York, to Elizabeth Hinch and Edward J. Miller.[2][3] He attended the parochial schools of Lockport and graduated from Lockport High School in 1931.[4] Miller attended the University of Notre Dame where he graduated with a B.A. in 1935 and Albany Law School of Union University, New York where he graduated with an LL.B. in 1938.[5] He was admitted to the bar in 1938, and practiced in Lockport.[6] In 1942, Miller was appointed a commissioner for the U.S. District Court in Buffalo.[5]

Miller enlisted in the United States Army on July 1, 1942 and received training in the Military Intelligence branch.[7] After serving with an Intelligence unit in Richmond, Virginia, in May 1945, Miller received his commission as a first lieutenant and was assigned to the War Criminals Branch of the War Department staff.[5] In August 1945, he was assigned as assistant prosecutor of Nazi war criminals during the Nuremberg trials.[5] Miller was discharged in March 1946, and returned to Lockport.[5]

Miller served as an assistant district attorney of Niagara County, New York from 1946 to 1948.[6] Governor Thomas E. Dewey appointed Miller district attorney in January 1948, and Miller won election to a full term in November.[6] He served until resigning in January 1951 as he prepared to assume his seat in Congress.[8]

In August 1950, Miller won the Republican nomination in New York's 42nd Congressional district after defeating Melvin L. Payne and James W. Heary in a primary.[9] He won the general election in November by defeating the Democratic nominee, Mary Louise Nice.[10]

After redistricting placed Miller in New York's 40th Congressional District, he was easily reelected every two years from 1952 to 1962.[11] He rose through seniority to become the second-ranking Republican on the Judiciary Committee, and received credit for two major pieces of legislation.[12] The first was a compromise on the development of Niagara Falls hydroelectric power, and the second was a law authorizing construction of a new Lake Erie‐Lake Ontario canal east of the Niagara River.[7][13]

Miller became influential with respect to the internal workings of the House.[7] In 1959, he took part in the Republican caucus' action to replace Minority Leader (and former Speaker) Joseph W. Martin Jr. with Charles Halleck.[7] Republicans had lost House seats in the 1958 election, and decided to replace the moderate Martin with the more conservative Halleck.[7] Miller voted in favor of the Civil Rights Acts of 1957,[14] 1960,[15] and 1964,[16] as well as the 24th Amendment to the U.S. Constitution.[17]

In 1960, Miller won election as head of the National Republican Congressional Committee.[6] In the November election, the party gained 22 House seats, an achievement that was notable because it occurred as Republicans were losing the presidential election.[6]

Miller's success with the 1960 House elections led to his selection as head of the Republican National Committee.[7] He served from 1961 to 1964, and advocated for the party to become more conservative, including tacitly supporting Goldwater for the 1964 presidential nomination.[7]

As chairman, Miller oversaw the party's efforts during the 1962 Congressional elections.[18] Though Republicans lost five seats in the Senate, they gained four in the House.[18] In addition, Democratic candidates in several races throughout the South experienced tougher than expected races, indicating that the domination the Democrats had enjoyed regionally since the Civil War was in peril.[18] These included the moderate-to-liberal Senator J. Lister Hill of Alabama, who defeated business Republican businessman James D. Martin by just 50.9 percent to 49.1.[19] Martin's strong showing demonstrated his viability as a candidate, and in 1964 he was elected to the U.S. House.[20]

In the early 1960s, leading Republicans including Senator Barry Goldwater began advocating for a plan that they called the Southern Strategy, an effort to make Republicans gains in the Solid South, which had been pro-Democratic since the American Civil War.[21][22] Under the Southern Strategy, Republicans would continue an earlier effort to make inroads in the south, Operation Dixie, by ending attempts to appeal to African American voters in the northern states, and instead appeal to white conservative voters in the south.[23] As documented by reporters and columnists including Joseph Alsop and Arthur Krock, on the surface the Southern Strategy would appeal to white voters in the south by advocating against the New Frontier programs of President John F. Kennedy and in favor of a smaller federal government and states' rights, while less publicly arguing against the Civil rights movement and in favor of continued racial segregation.[22][24][25][26][27]

Miller concurred with Goldwater, and backed the Southern Strategy, including holding private meetings of the RNC and other key Republican leaders in late 1962 and early 1963 so they could decide whether to implement it.[28] Overruling the moderate and liberal wings of the party, its leadership decided to pursue the Southern Strategy for the 1964 elections and beyond.[29] 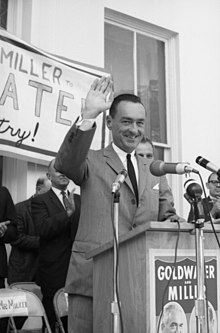 Miller speaking in Tallahassee in 1964.

After winning the Republican presidential nomination, Goldwater chose Miller to be his running mate.[6] In Goldwater's telling, he picked Miller because "he drives Johnson nuts" with his Republican activism.[30] But by some other accounts, Johnson "was barely aware of Miller's existence."[30] Miller's Eastern roots and Catholic faith balanced the ticket in some ways, but ideologically he was conservative like Goldwater.[30] His relative obscurity—"he was better known for snipes at President Kennedy than for anything else"—gave birth to the refrain "Here's a riddle, it's a killer / Who the hell is William Miller?"[30]

In the general election, incumbent Lyndon Johnson won a landslide victory. The Goldwater/Miller ticket carried only six states - Goldwater's home state of Arizona, plus Louisiana, Alabama, Mississippi, Georgia, and South Carolina.[31] Despite the defeat, the ticket's inroads into the previously Solid South were seen as an indication that the Southern Strategy was viable, and Republicans continued to pursue it in subsequent campaigns.[29]

Following the defeat of the Goldwater–Miller ticket, Miller returned to his hometown of Lockport, New York, where he resumed his law practice.[6] He also appeared in one of the first "Do you know me?" commercials for American Express.[32] Mark Z. Barabak later wrote in the Los Angeles Times that by the time he died, Miller was "better known for his advertising appearance than his years in Congress."[33]

He participated in an interview in 1979 where he stated that he did not miss politics as it "had such a saturation of it in my life".[34]

On June 5, 1983, he was admitted into Millard Fillmore Suburban Hospital in Erie County, New York for diagnostic tests.[35] He suffered a stroke in mid-June and died in Buffalo, New York on June 24, 1983.[35] Miller was buried at Arlington National Cemetery.[6] In noting Miller's passing, Goldwater stated "he was one of the greatest men I have ever known and I feel his loss very deeply".[36]

He and his wife, Stephanie (Wagner), had three daughters and one son.[6] His youngest daughter, Stephanie Miller, was a stand-up comedian in the 1980s, and CNBC late night TV host in the 1990s. Beginning in 2004 she has hosted a nationally-syndicated liberal radio talk show host based in Los Angeles.[6] His son, William E. Miller Jr., ran unsuccessfully as a Republican for the House of Representatives in 1992 and 1994 to represent New York's 29th district.[37]