Osage County (county code OS) is a county located in the U.S. state of Kansas. As of the 2010 census, the county population was 16,295.[2] Its county seat is Lyndon,[3] and its most populous city is Osage City. The county was originally organized in 1855 as Weller County, and was renamed in 1859 after the Osage River that runs through it, which is itself named for the Osage Native American Tribe.[4]

For many millennia, the Great Plains of North America was inhabited by nomadic Native Americans. From the 16th century to 18th century, the Kingdom of France claimed ownership of large parts of North America. In 1762, after the French and Indian War, France secretly ceded New France to Spain, per the Treaty of Fontainebleau.

Osage County is included in the Topeka Metropolitan Statistical Area.

Osage County is strongly Republican. In only six presidential elections from 1880 to the present day has the county failed to back the Republican Party candidate, most recently in Lyndon B. Johnson's national landslide. of 1964.

Osage County was a prohibition, or "dry", county until the Kansas Constitution was amended in 1986 and voters approved the sale of alcoholic liquor by the individual drink with a 30% food sales requirement.[13]

Osage County is served by a weekly newspaper, The Osage County Herald-Chronicle. The newspaper has a circulation of approximately 4,500, making it the 3rd largest paid weekly publication in the state of Kansas. 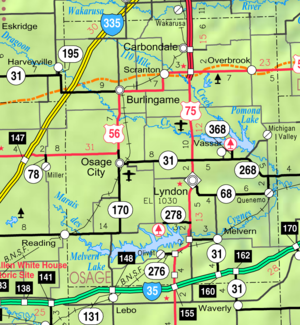 Osage County is divided into sixteen townships. The city of Osage City is considered governmentally independent and is excluded from the census figures for the townships. In the following table, the population center is the largest city (or cities) included in that township's population total, if it is of a significant size.

See also: List of books about Kansas, including historical information about its counties and cities