William Steele (May 1, 1819 – January 12, 1885) was a career United States Army officer who served with distinction during the Mexican–American War. He later served as a Confederate general during the American Civil War.

Steele was born in Albany, New York; his mother was from Florida and his father originally from New England.[1] He attended the United States Military Academy at West Point in 1836, graduating four years later standing 31st out of 42 cadets. He was appointed a brevet second lieutenant in the 2nd U.S. Dragoons on July 1, 1840.[2]

Steele served at the Cavalry School for Practice at the Carlisle Barracks in Pennsylvania in 1840 and 1841, during which he was promoted to second lieutenant on February 2, 1841. He participated during the Seminole Wars in Florida in 1841 and 1842, engaged there in two skirmishes. Steele and the 2nd Dragoons were on frontier duty at Fort Jesup in Louisiana from 1842 to 1844, and then in garrison at Jefferson Barracks in Missouri in 1844 and 1845.[3]

After the war with Mexico ended, Steele was the acting asst. adjutant general of the cavalry brigade in 1847 and 1848. He was also the adjutant of the 2d Dragoons from December 20, 1847, to April 10, 1849, during which the 2nd was in garrison duty at East Pascagoula, Mississippi in 1848. Steele then served on recruiting service in 1848 and 1849, and on frontier duty with the 2nd at several locations in Texas. Included in these assignments were being stationed at Fredericksburg in 1849 and 1850, at Fort Martin Scott, in Austin in 1850, and at Fort Lincoln in 1850 and 1851. Steele and the 2nd Dragoons returned to Fort Martin Scott and later back at Fort Lincoln in 1851, and Steele served as Quartermaster in Austin in 1851 and 1852, during which he was promoted to captain as of November 10, 1851.[3] Due to his multiple postings in Texas, he married a woman from there in 1850.[1]

Steele commanded the Department's Eastern Subdistrict of the District of Texas, New Mexico, & Arizona beginning on March 18, 1864. He participated in the Red River Campaign that spring under General Richard Taylor.[6] He then briefly led a division of cavalry until May 26, 1865, the day Gen. Smith surrendered the department. Steele was paroled on August 4 from San Antonio, Texas.[2] 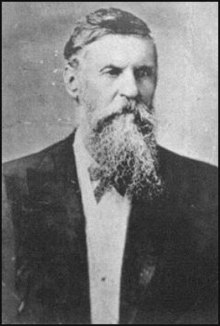 After the war, Steele returned to Texas and became a Commission merchant of cotton from 1866 to 1873. He moved to Austin in 1873 and was then Adjutant General of Texas until his death in early 1885. He died in San Antonio, Texas, at the age of 65, and is buried at Oakwood Cemetery in Austin.[7]