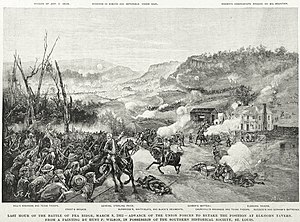 During the Second Battle of Corinth on 3–4 October 1862, the 9th Texas Cavalry served dismounted in Charles W. Phifer's brigade in the division of Dabney H. Maury. Also assigned to Phifer's brigade were the 3rd Arkansas and 6th Texas Cavalry Regiments (dismounted), Stirman's Arkansas Sharpshooter Battalion, and McNally's battery.[12] In the first day's action, the 9th Texas captured a two gun section of John Welker's Battery H, 1st Missouri Light Artillery.[13] On the second day, Phifer's soldiers attacked the Union lines a short distance east of Battery Robinett. The 6th and 9th Texas Cavalry fought two Ohio regiments from John W. Fuller's brigade. After Texans' first charge was stopped by a storm of bullets, they fell back about 20 yards and engaged in a furious fusillade. A second charge was also repulsed.[14] The officers of the 6th and 9th regiments finally ordered a retreat after a terrific and costly fight with the two sides as close as eight yards apart.[15]

The 9th Texas Cavalry fought at the Battle of Hatchie's Bridge on 5 October. Leading Van Dorn's retreat, John Creed Moore's brigade was ambushed by Federals and lost 300 men on the west bank of the Hatchie River. Phifer's brigade, led by Sul Ross and William Lewis Cabell's brigade successfully defended the east bank,[16] inflicting 570 casualties on the Union forces. In this contest, Ross's troops only sustained losses of seven killed and 22 wounded.[17] In the two battles, Maury's division lost 2,500 out of 3,900 men.[18]

A new Texas cavalry brigade formed on 23 October 1862 with John Wilkins Whitfield appointed to lead it. The brigade consisted of the 3rd Texas, 6th Texas, 9th Texas, and 27th Texas Cavalry Regiments.[19] By December 1862, the regiment remounted and served in the Holly Springs Raid.[2] In this operation, Van Dorn led 3,500 Confederate cavalry from Grenada to Holly Springs, Mississippi. Taking the Federal garrison by surprise, the Confederate horsemen captured 1,500 men and burned supplies worth US$1.5 million. The raiders continued north to Bolivar, Tennessee, attacking Union posts along the way, then they escaped to Grenada. The raid convinced Ulysses S. Grant to withdraw his army to Memphis.[20]

On 5 March 1863, Whitfield's Texas cavalry brigade fought at the Battle of Thompson's Station. On 4 March, a Federal infantry brigade led by John Coburn marched south from Franklin, Tennessee on a reconnaissance. The Federals ran into elements of William Hicks Jackson's Confederate cavalry division, but continued to advance. The next morning Coburn's brigade approached Thompson's Station and drove Confederates from two hills north of town. At this time, the Union artillery and cavalry units suddenly left the field.[21] Van Dorn ordered Jackson's troopers to dismount and attack Coburn's soldiers from the front, while Nathan Bedford Forrest's division circled around from behind. Forrest's men captured Coburn's wagon train and blocked the Union escape route.[22] After fighting for five hours,[21] the Federals surrendered when they ran out of ammunition. Confederate casualties numbered 357 while the Union troops lost 1,600 killed, wounded, and captured.[22]

In May 1863, the regiment was part of Joseph E. Johnston army that tried unsuccessfully to relieve the Siege of Vicksburg. The unit fought in many skirmishes but there were no major actions.[2] On 4 June 1863, W. H. Jackson reported that Whitfield's cavalry brigade numbered 123 officers and 1,354 men present for duty in the 3rd, 6th, 9th, and 27th Texas. The 9th Texas was commanded by Colonel D. W. Jones.[23] In 1864 the regiment seized the gunboat USS Petrel.[1] During the 1864 Atlanta campaign, the 9th Texas Cavalry under Colonel Dudley W. Jones was part of Lawrence Sullivan "Sul" Ross's brigade in W. H. Jackson's cavalry division. This unit transferred from Mississippi to Georgia with Leonidas Polk's corps at the start of the campaign. It was composed of the same units as Whitfield's brigade.[24] Starting on 15 May 1864, for 112 days Ross's brigade was in continuous action.[2]