The 2nd Arkansas Mounted Rifles (1861–1865) was a Confederate Army infantry regiment that served during the American Civil War. Raised in 1861, the regiment consisted of nine companies, which were drawn from various counties in Arkansas. Throughout the course of the war, the 2nd Arkansas Mounted Rifles fought in a number of battles, including those at Wilson's Creek and Pea Ridge, and participated in a number of campaigns such as Tullahoma, Atlanta and the Carolinas. The regiment's final battle came at Bentonville in March 1865 after which its remaining personnel were consolidated into the 1st Arkansas Consolidated Mounted Rifles.

The 2nd Arkansas Mounted Rifles was organized in the summer of 1861, with James M. McIntosh appointed as colonel. Other appointments upon establishment included: Ben T. Embry, lieutenant colonel; Brown, major; W. D. DeBerry, surgeon; W. A. C. Sayle, assistant surgeon. The regiment was inducted into Confederate Service on June 15, 1861, at Osage Prairie, outside Bentonville, Arkansas. The unit was composed of volunteer companies from the following counties:[2]

General McIntosh was killed at the battle of Elkhorn Tavern, or Pea Ridge. In May 1862 the Confederate Army underwent an army-wide reorganization due to the passage of the Conscription Act by the Confederate Congress in April 1962. All twelve-month regiments had to re-muster and enlist for two years or the duration of the war; a new election of officers was ordered; and men who were exempted from service by age or other reasons under the Conscription Act were allowed to take a discharge and go home. Officers who did not choose to stand for re-election were also offered a discharge. The reorganization was accomplished among all the Arkansas regiments in and around Corinth, Mississippi, following the Battle of Shiloh.[13]

When the regiment was reorganized after the battle of Shiloh, the following field officers were elected:[14] Captain Harris Flanagin was elected colonel; Major J. A. Williamson was elected lieutenant-colonel; and Captain James P. Eagle was elected major. Upon Colonel Flanagin being elected Governor of the State of Arkansas in 1862, Lieutenant Colonel Williamson became colonel, and Captain Eagle became the lieutenant colonel. Colonel Williamson lost a leg at the battle of Resaca, May 1864, and J. T. Smith was appointed colonel. After Smith was killed in battle on July 28, James P. Eagle then succeeded him as colonel of the regiment.[15] 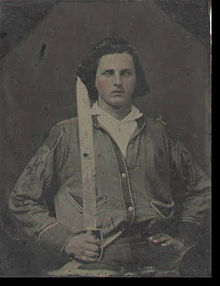 Colonel McIntosh was educated at the United States Military Academy. He was impetuous to a degree that scorned all caution[1] Being ordered by General McCulloch into the Indian Territory against the Creek chief, Hopoeithleyohola, he dispersed the Indian Federal organization. It is said his regiment was deployed in groups of two for five miles, when he at its head began the attack upon the Indian camp. He was speedily promoted to brigadier-general, and Embry became colonel. The regiment took part in the battles of Oak Hills and Elkhorn, and in the Kentucky campaign under E. Kirby Smith. Among its battles were Richmond, Ky., Murfreesboro, Jackson, Miss., Chickamauga, Resaca, Atlanta, Ezra Church, Lovejoy's Station, Jonesboro, Moore's Station, Franklin, Tenn., Nashville, Sugar Creek, and Bentonville, N.C.[1][16] In accordance with Confederate Adjutant and Inspector General's Office Order Number 131,[17] ten soldiers of the regiment were recognized for courage and good conduct on the field for the Battle of Murfreesboro[18] The unit is entitled to the following Campaign Participation Credits:

After the Battle of Nashville, Tennessee, the Arkansas regiments of Reynolds' Brigade marched via Bainbridge, Alabama, Tuscumbia, Iuka and Corinth to Tupelo, Mississippi, where they went into camp on January 10, 1865. They departed Tupelo on January 30 and marched to West Point, Mississippi. From West Point they traveled by rail to Selma, Alabama. From Selma they traveled by steamboat to Montgomery, then by rail to Columbus, Georgia. From Columbus they marched via Macon and Milledgeville to Mayfield, Georgia. From Mayfield they traveled by rail to Augusta, Georgia. From there they marched to Newberry, South Carolina. On March 19, 1865, they fought their last major engagement at the Battle of Bentonville, North Carolina. They then marched to Smithfield, North Carolina, where the entire brigade was consolidated into a single understrength regiment, the 1st Consolidated Mounted Rifles on April 9, 1865.[21]

The 1st Arkansas Consolidated Mounted Rifles surrendered with the Army of Tennessee at Greensboro, North Carolina, April 26, 1865. The regiment was paroled on May 1, 1865, at Jamestown, North Carolina.[22] After the surrender, the men were offered free rail transportation (where available) in the direction of their homes, by what was left of the Southern railway companies. Most of the men traveled by rail, where they could. A large number of men were killed or seriously injured in a railroad accident at Flat Creek Bridge, Tennessee, on May 25, 1865.[21]