Skip to content
Not to be confused with Benton, Arkansas.
U.S. county in Arkansas

Benton County is a county located in the northwestern corner of the U.S. state of Arkansas. As of the 2010 census, the population was 221,339,[1] making it the second-most populous county in Arkansas. The county seat is Bentonville.[2] The county was formed on September 30, 1836 and was named after Thomas Hart Benton, a U.S. Senator from Missouri. In 2012, Benton County voters elected to make the county wet, or a non-alcohol prohibition location.[3] Benton County is part of the Northwest Arkansas region. 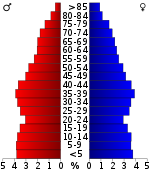 As of 2005 estimates, Benton County's population was 81.7% non-Hispanic white, while the percentage of Latinos grew by 60 percent in the time period. 1.1% of the population was African-American; 1.6% was Native American (the historical presence of the Cherokee Indians live in close proximity to Oklahoma); 1.7% was Asian (there was a large influx of Filipinos, Vietnamese and South Asian immigrants in recent decades) and 0.2% of the population was Pacific Islander. 1.6% reported two or more races, usually not black-white due to a minuscule African-American population. 12.8% was Latino, but the United States Hispanic Chamber of Commerce believed the official estimate is underreported and Latinos could well be 20 percent of the population.[12]

Politically, Benton County is arguably one of the most Republican-Leaning Counties in Arkansas. Benton County has not voted completely Democrat in a Presidential election since 1948, when former Missouri senator Harry S. Truman won Benton County along with winning Arkansas as a whole.[14]

The historic Trail of Tears is on US highways 62 and 71 and connects with U.S. Route 412 in nearby Washington County.

The Arkansas and Missouri Railroad parallels US Highways 62 and 71 in the county.

Like all of the conservative Bible Belt of the Ozarks and Ouachitas, Benton County is strongly Republican; however, it has been such for longer than most of the region. It voted Republican in 1928 and 1944, and the last Democratic presidential nominee to carry the county was Harry S. Truman in 1948.[15] Along with nearby Sebastian County it was one of the few counties in Arkansas to resist the appeal of southern “favorite sons” Lyndon B. Johnson, George Wallace, Jimmy Carter and Bill Clinton.

Townships in Benton County, Arkansas as of 2010

Note: Most Arkansas counties have names for their townships. Benton County, however, has numbers instead of names.

Townships in Arkansas are the divisions of a county. Each township includes unincorporated areas; some may have incorporated cities or towns within part of their boundaries. Arkansas townships have limited purposes in modern times. However, the United States Census does list Arkansas population based on townships (sometimes referred to as "county subdivisions" or "minor civil divisions"). Townships are also of value for historical purposes in terms of genealogical research. Each town or city is within one or more townships in an Arkansas county based on census maps and publications. The townships of Benton County are listed below; listed in parentheses are the cities, towns, and/or census-designated places that are fully or partially inside the township.[17][18]