The Muscogee (Creek) Nation is a federally-recognized Native American tribe based in the U.S. state of Oklahoma. The nation descends from the historic Creek Confederacy, a large group of indigenous peoples of the Southeastern Woodlands. Official languages include Muscogee, Yuchi, Natchez, Alabama, and Koasati, with Muscogee retaining the largest number of speakers. They commonly refer to themselves as Este Mvskokvlke (pronounced [isti məskógəlgi]). Historically, they were often referred to by European Americans as one of the Five Civilized Tribes of the American Southeast.[3]

Boundaries of the Five Tribes

The Muscogee (Creek) Nation is headquartered in Okmulgee, Oklahoma and serves as the seat of tribal government. The Muscogee Nation's Reservation status was affirmed in 2020 by the decision of the United States Supreme Court in Sharp v. Murphy, which held that the allotted Muscogee (Creek) Nation reservation in Oklahoma has not been disestablished and therefore retains jurisdiction over tribal citizens in Creek, Hughes, Okfuskee, Okmulgee, Mayes, McIntosh, Muskogee, Rogers, Seminole, Tulsa, and Wagoner counties in Oklahoma.[5] 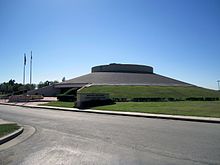 Muscogee (Creek) Nation Mound building. Seat of government for both Legislative and Judicial branches of government 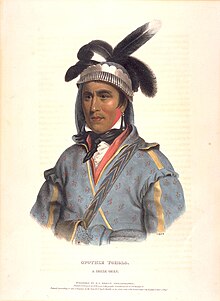 The legislative branch is the National Council and consists of sixteen members elected to represent the 8 districts within the tribe's jurisdictional area. National Council representatives draft and sponsor the laws and resolutions of the Nation.[6] The eight districts include: Creek, Tulsa, Wagoner, Okfuskee, Muskogee, Okmulgee, McIntosh, and Tukvpvtce (Hughes).

There is a separate Muscogee (Creek) Nation Bar Association (MCNBA).

In 2016, there were 80,591 people enrolled in the Muscogee Creek Nation. Of these, 60,403 lived within the state of Oklahoma.[7] Since 1979, membership to the tribe is based on documented lineal descent from persons listed as Creek 'Indians by Blood' on the Dawes Rolls.[8] The tribe does not have a minimum blood quantum requirement. 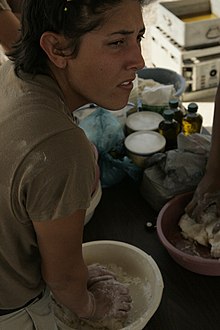 The Nation operates its own division of housing and issues vehicle license plates.[1] Their Division of Health contracts with Indian Health Services to maintain the Creek Nation Community Hospital and several community clinics, a vocational rehabilitation program, nutrition programs for children and the elderly, and programs dedicated to diabetes, tobacco prevention, and caregivers.[9]

The Muscogee Nation operates the Lighthorse Tribal Police Department, with 43 active employees.[10] The tribe has its own program for enforcing child support payments.

The Mvskoke Food Sovereignty Initiative is sponsored by the nation. It educates and encourages tribal members to grow their own traditional foods for health, environmental sustainability, economic development, and sharing of knowledge and community between generations.[11]

The tribe operates a budget in excess of $290 million, has over 4,000 employees, and provides services within their jurisdiction.[12]

The Nation's historic old Council House (also known as the Creek National Capitol) was built in 1878 and located in downtown Okmulgee. It is currently under renovation. It now serves as a museum of tribal history.[15][16]

College of the Muscogee Nation

In 2004, the Muscogee Nation founded a tribal college in Okmulgee, the College of the Muscogee Nation (CMN). CMN is a two-year institution, offering associate degrees in Tribal Services, Police Science, Gaming, and Native American Studies. It offers Mvskoke language classes as well. In 2007, 137 students enrolled, and the college has plans for expansion.[17]

The Nation includes the Creek people and descendants of their African-descended slaves[18] who were forced by the US government to relocate from their ancestral homes in the Southeast to Indian Territory in the 1830s, during the Trail of Tears. They signed another treaty with the federal government in 1856.[19]

During the American Civil War, the tribe split into two factions, one allied with the Confederacy and the other, under Opothleyahola, allied with the Union.[20] There were conflicts between pro-Confederate and pro-Union forces in the Indian Territory during the war. The pro-Confederate forces pursued the loyalists who were leaving to take refuge in Kansas. They fought at the Battle of Round Mountain, Battle of Chusto-Talasah, and Battle of Chustenahlah, resulting in 2,000 deaths among the 9,000 loyalists who were leaving.[21] 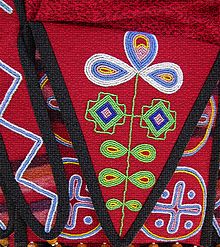 After defeating the Confederacy, the Union required new peace treaties with the Five Civilized Tribes, which had allied with that insurrection. The Treaty of 1866 required the Creek to abolish slavery within their territory and to grant tribal citizenship to those Creek Freedmen who chose to stay in the territory; this citizenship was to include voting rights and shares of annuities and land allotments.[22] If the Creek Freedmen moved out to United States territory, they would be granted United States citizenship, as were other emancipated African Americans.[23]

The Creek established a new government in 1866 and selected a new capital of Okmulgee. In 1867 they ratified a new constitution to incorporate elements of the new peace treaty, and their own desire for changes.[3]

They built their capitol building in 1867 and enlarged it in 1878. Today the Creek National Capitol is a National Historic Landmark. It now houses the Creek Council House Museum, as more space was needed for the government. During the prosperous final decades of the 19th century, when the tribe had autonomy and minimal interference from the federal government, the Nation built schools, churches, and public houses.[3]

At the turn of the century, Congress passed the 1898 Curtis Act, which dismantled tribal governments in another federal government attempt to assimilate the Native American people. The related Dawes Allotment Act required the break-up of communal tribal landholdings to allot land to individual households. This was intended to encourage adoption of the European-American style of subsistence farming and property ownership. It also was a means to extinguish Native American land claims and prepare for admitting Indian Territory and Oklahoma Territory as a state, which took place in 1907.

The government declared that communal land remaining after allotments to existing households was "surplus". It was classified as excess and made available for sale to non-Natives. This resulted in the Creek and other tribes losing control over much of their former lands.

In the hasty process of registration, the Dawes Commission registered tribal members in three categories: they distinguished among "Creek by Blood" and "Creek Freedmen," a category where they listed anyone with visible African ancestry, regardless of their proportion of Creek ancestry; and "Intermarried Whites." The process was so confused that some members of the same families of Freedmen were classified into different groups. The 1906 Five Civilized Tribes Act (April 26, 1906) was passed by the US Congress in anticipation of approving statehood for Oklahoma in 1907. During this time, the Creek had lost more than 2 million acres (8,100 km2) to non-Native settlers and the US government.

Later, when Creek communities organized and set up governments under the 1936 Oklahoma Indian Welfare Act, some former Muscogee tribal towns reorganized that were in former Indian Territory and the Southeast. Some descendants had remained there and preserved cultural continuity. Others reorganized and gained recognition later in the 20th century. The following Muscogee groups have gained federal recognition as tribes: the Alabama-Quassarte Tribal Town, Kialegee Tribal Town, and Thlopthlocco Tribal Town of Oklahoma; the Coushatta Tribe of Louisiana, the Alabama-Coushatta Tribe of Texas, and the Poarch Band of Creeks in Alabama.

The Muscogee (Creek) Nation did not reorganize its government and regain federal recognition until 1970. This was an era of increasing Native American activism across the country. In 1979 the tribe ratified a new constitution that replaced the 1866 constitution.[3] The pivotal 1976 court case helped end US federal paternalism. It ushered in an era of growing self-determination. Using the Dawes Rolls as a basis for determining membership of descendants, the Nation has enrolled more than 58,000 members, descendants of the allottees.

From 1981 to 2001, the Creek had membership rules that allowed applicants to use a variety of documentary sources to establish qualifications for membership.

In 1979 the Muscogee Nation Constitutional Convention voted to limit citizenship in the Nation to persons who could prove descent by blood, meaning that members had to be able to document direct descent from an ancestor listed on the Dawes Commission roll in the category of "Creek by Blood". Persons proving they are descended from persons listed as Creek by blood can become citizens of the Muscogee (Creek) Nation. The 1893 registry was established to identify citizens of the nation at the time of allotment of communal lands and dissolution of the reservation system and tribal government.[24]

The 1979 vote on citizenship excluded descendants of persons recorded only as Creek Freedmen in the Dawes Rolls. This decision has been challenged in court by those descendants, according to the 1866 treaty[25] of "Creek Freedmen."[26][27]

The Freedmen were listed on the Dawes Rolls. Some descendants can prove by documentation in other registers that they had ancestors with Creek blood. The Freedmen had been listed on a separate register, regardless of their proportion of Creek ancestry. This classification did not acknowledge the unions and intermarriage that had taken place for years between the ethnic groups. Prior to the change in code, Creek Freedmen could use existing registers and the preponderance of evidence to establish qualification for citizenship, and were to be aided by the Citizenship Board. The Creek Freedmen have challenged their exclusion from citizenship in legal actions[28][29] which are pending.[30]