The 1st Kansas Colored Infantry Regiment was an infantry regiment that served in the Union Army during the American Civil War. It was the first black regiment to be organized in a northern state and the first black unit to see combat during the Civil War. At the Battle of Poison Spring, the regiment lost nearly half its number, and suffered the highest losses of any Kansas regiment during the war.

The 1st Kansas Infantry (Colored) was organized by the work of Senator James Henry Lane at Fort Scott, Kansas and mustered in as a battalion of six companies on January 13, 1863 for three years.[2] Four additional companies were recruited and mustered in between January 13 and May 2, 1863. It mustered in under the command of Colonel James Monroe Williams. 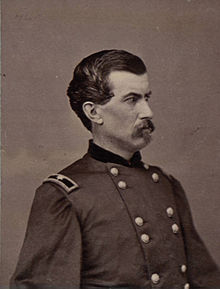 The 1st Kansas Colored Infantry ceased to exist on December 13, 1864, when it became a U.S. Army unit and its designation was changed to the 79th Regiment Infantry U.S. Colored Troops.[4][5] Also attached to the regiment at some point was Armstrong's Battery Light Artillery, a unit for which few details are known.

In 2011, quilt artist and educator Marla Jackson worked with junior high students in Lawrence, Kansas, to produce a collaborative and commemorative quilt on the topic of the 1st Kansas Infantry.[6] The quilt, along with several others by Jackson that evoked similar themes, was displayed at the Spencer Museum of Art.