The city was settled by the Choctaw and named in 1867 by a Baptist missionary for Chief Atoka, whose name means "ball ground" in English.

Atoka was founded by the Choctaw Indians in the 1850s,[8] and named for Captain Atoka, a leader of the Choctaw Nation and the signer of the Treaty of Dancing Rabbit Creek, which began the process of re-locating the Choctaw people from Mississippi to Oklahoma in 1830. The name "Atoka" is derived from the Choctaw word hitoka (or hetoka), which means "ball ground" in English.[9] He is believed to be buried near the town of Farris. Atoka is the site of the oldest Catholic parish in the Indian Territory, the oldest chapter of the Freemasons in Oklahoma, and the oldest chapter of the Order of the Eastern Star in Oklahoma.

A small Civil War confrontation occurred on February 13, 1864, north of Atoka. Early in 1864, Colonel William A. Philips set out with some 1,500 Union troops from Fort Gibson, Oklahoma, to cut a swath through Confederate Indian Territory (Oklahoma). Their purpose was to break Confederate control over the Indian Territory and gain the support and possibly recruits from the Native Americans.

"I take you with me to clean out the Indian Nation south of the river and drive away and destroy rebels. Let me say a few words to you that you are not to forget .... Those who are still in arms are rebels, who ought to die. Do not kill a prisoner after he has surrendered. But I do not ask you to take prisoners. I ask you to make your footsteps severe and terrible. Muskogees! (Creeks) the time has now come when you are to remember the authors of all your sufferings; those who started a needless and wicked war .... Stand by me faithfully and we will soon have peace ...." -- Colonel William A. Philips, to his men before beginning the campaign

Along the way, Colonel Phillips sent out an advance of about 350 men toward Boggy Depot, a large Confederate supply base located on the Texas Road with the intention of capturing the outpost. While en route, his command encountered a small Confederate camp on the banks of the Middle Boggy River, made up of around 90 Confederate soldiers.

In the ensuing skirmish 47 Confederate soldiers were killed. Among the dead were those wounded who had been left behind when their comrades retreated. They were found on the battlefield with their throats slashed. There were no Union deaths as a result of the battle.

The Confederate Museum in Atoka (since 2016 the Atoka Museum) commemorates this battle.[8] 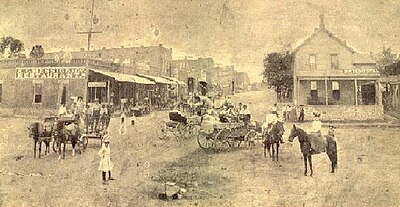 An early, turn-of-the-century photograph of Court Street in Atoka

Though the Choctaw Indians had inhabited the area since the 1830s with a small town located near the city today, the city was officially founded by a Baptist missionary named J.S. Murrow in 1867 and quickly supplanted the dying town of Boggy Depot as the chief city in Atoka County, Choctaw Nation, a territorial-era county which included portions of today's Atoka, Coal, Hughes and Pittsburg counties. A main contributing factor in the early growth of Atoka was the MKT Railroad, which came through the area in 1872. The railroad provided the economic lifeblood to Atoka that any isolated rural town needs to survive and flourish. Many businesses quickly moved to Atoka from Boggy Depot.[8]

Also in 1872, Father Michael Smyth founded St. Patrick's Catholic Church. This was the first Roman Catholic church in what became the state of Oklahoma.[8] On October 12, 1875, the Sacred Heart Mission, what later became St. Gregory's University, was founded in Atoka by the Benedictine monks Father Isidore Robot, O.S.B., and Brother Dominic Lambert, O.S.B.[10] In 1876, the mission relocated to near Konawa, Oklahoma and became an abbey.

About 1896, Robert L. Williams, who would become the third Governor of Oklahoma and first Chief Justice of the Oklahoma Supreme Court, moved to Atoka (then a part of the old Indian Territory) from Troy, Alabama. In 1898, land allotments were implemented and town lots were sold, as required by the Dawes Commission.[8]

Despite being strategically located at the intersection of two major highways (especially U.S. 69, a major transportation artery in the region), Atoka is struggling to create a town attractive to both new business and new residents. Even though the town has experienced an economic upturn in the past few years, it still lacks the main thing that ensures economic prosperity and attracts new residents: well-paying jobs.[citation needed]

However, there is a beacon of hope for Atoka in the future. For the past several years, economic growth has been steadily moving northward along U.S. 75 from Dallas, Texas. Two towns located to the south of Atoka, Durant, Oklahoma, and Sherman, Texas, are experiencing tremendous economic and population growth. As this wave of development gradually moves north, the next town in line is the city of Atoka. If the growth continues, it is possible that Atoka could begin to see the type of expansion currently underway across the Red River to the south.

There were 1,277 households out of which 26.4% had children under the age of 18 living with them, 38.9% were married couples living together, 15.0% had a female householder with no husband present, and 42.4% were non-families. 39.2% of all households were made up of individuals and 21.3% had someone living alone who was 65 years of age or older. The average household size was 2.22 and the average family size was 2.99.

The city of Atoka operates under a home-rule charter with a council-manager form of government.[8] The Atoka City Council has five elected members, which include the Mayor and Vice Mayor.

The office of Mayor of Atoka is largely a ceremonial position, as most executive authority is held by the City Manager, who acts on behalf of the council.[14]

Atoka County's original courthouse, which was torn down in favor of a more modern structure in 1962

Being the county seat of Atoka County, Atoka is the center of the county judicial system. The courthouse is located on Court Street, and the building has served as such since 1963 when it replaced the old courthouse.[15] The District Judges are Preston Harbuck and Paula Inge.

The city judge is David Youngblood, and the city attorney is Erik Johnson.

Atoka is included in Oklahoma's 2nd congressional district, of which Markwayne Mullin is the representative. The city is also included in State House District 22 and State Senate District 6, from which State Representative Charles McCall and Senator Josh Brecheen currently serve in the state legislature.

In the 19th Century, the economy of Atoka and the surrounding area was founded on wood products. There were rich stands of hardwood nearby and ample water from Boggy River to power sawmills. The railroad facilitated shipment of the products.[8]

In the early 20th Century, Atoka became a ranching and farming community, with its economic base firmly planted in agriculturally related venues. However, in recent years, efforts have been made by the Chamber of Commerce, the City Council, and various other local leaders to create new industrial jobs in Atoka and Atoka County. Currently, an industrial park is open for development north of the city on U.S. Highway 69, as well as a smaller park on U.S. Highway 75 west of town.

In August 2006, the city's largest employer, Ethan Allen Furniture, announced that it would be closing its Atoka plant in favor of "selected off-shore vendors", as reported in The Oklahoman following the announcement of the plant's closing. With the closure of the Ethan Allen plant, located north of the city proper, more than two hundred people lost their jobs (many of whom had held them since the plant opened). As of May 2007, Ethan Allen has resumed operations at the Atoka plant, converting the former manufacturing facility to a distribution center.

Four highways intersect in Atoka: U.S. Highway 69 (a major transportation artery that travels from Texas to Minnesota), State Highway 3, State Highway 7, and U.S. Highway 75, thus making it a convenient stop for motorists. It is located where U.S. 69 and U.S. 75 converge (heading south toward Texoma).

In addition to revenue generated at convenience stores, fast food restaurants, etc., Atoka (and Atoka County) is a popular hunting and fishing area; as well, scenic tourism plays a small, albeit important role in the city's economy. An effort is currently underway to place Atoka along a scenic byway.

Atoka is served by several media outlets, including the Atoka County Times, published weekly on Wednesdays, 102.1 KHKC, a radio station headquartered on the county line between Atoka and Coal counties, and KXII and KTEN, television stations broadcasting from Sherman, Texas.

Tradio, a locally well-known radio show, is broadcast every weekday morning. Tradio was known, among many things, for its host John Reuben. The shows consists of callers advertising items such as cars, furniture and animals, or events such as auctions and garage sales over the air. The tagline for show is, "Good morning, you're on Tradio," which is repeated by Reuben as he answers each call. The current host, Derek Reid, still sometimes answers the phone to people saying "Good Morning Brother John", as a nod to Reuben.

The Atoka High School campus is located on the west side of the town, and enrollment averages between 300 and 400 students from grades 9 to 12. Besides offering the basic courses and several Advanced Placement programs, Atoka High School offers classes in Spanish, Choir, Agricultural Education (FFA), and Drama, among others. The Parliamentary Procedure Team were State Champions in 2005 and National Semi-Finalists in 2007. The Mock Trial team has won the Oklahoma state competition six times. The school also offer sports such as baseball, softball, track and field, football, golf, and powerlifting and have represented Atoka in the state playoffs in many sports. A cafetorium opened in August 2007. With the new cafeteria, the high school is now a closed campus.