Hugo is a city and county seat of Choctaw County, Oklahoma, United States. It is located in southeastern Oklahoma, approximately 9 miles (14 km) north of the Texas state line. As of the 2010 census, the city population was 5,310.[5]

The city was founded in 1901 and named for the French novelist Victor Hugo.[6] In the postwar 20th century, the city served as winter quarters for some circus companies and performers. A cemetery has a section for circus personnel. Nearby is one of the oldest boarding schools west of the Mississippi: Goodland Academy, begun in 1848 as a Presbyterian mission, school and orphanage for Native American children.

The town is located in a cultural area of the state known as Little Dixie, as it was settled by Native American tribes, African Americans and European Americans from the southeastern United States. It is within the tourist area designated as Choctaw Country by the Oklahoma Department of Tourism.[7] 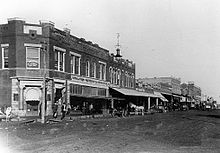 This was part of the Indian Territory to which the United States government relocated Native American tribes from east of the Mississippi River in the 1830s under its Indian Removal policy. Among the nations relocated here were the Choctaw, for whom the county is named. They were one of what were called the "Five Civilized Tribes" of the southeastern United States, as some of their people had adopted many elements of European-American culture. When they relocated, they brought with them the numerous enslaved African-Americans whom they held as workers and property.

As the majority of the Choctaw allied with the Confederate South during the American Civil War, the United States government insisted on a new peace treaty with them after its end. A condition was the Choctaws' emancipation of their slaves and granting to the freedmen of rights of full citizenship in the Choctaw nation, as the US was granting citizenship to former slaves of the South.[citation needed]

In 1901 the St. Louis–San Francisco Railway (Frisco) built a line from Hope, Arkansas, to Ardmore, Oklahoma. It crossed the north-south line Frisco had built in 1887 to connect Monett, Missouri, to Paris, Texas.[6] The territorial town that sprang up at the crossing would soon be named Hugo. The town's name was recommended by the wife of local surveyor W.H. Darrough, a fan of French writer Victor Hugo.[8] At the time of its founding, Hugo was located in Kiamitia County, a part of the Pushmataha District of the Choctaw Nation.

When counties were reorganized to prepare Oklahoma for admission as a state, Hugo was designated as the county seat of the redefined Choctaw County, as it was already a population center in the area.

After allotments of communal tribal land to individual households of tribal members under the Dawes Act, the Choctaw Nation lost control of much of its land, which was purchased by European Americans.

Hugo became a popular wintering place for circus and rodeo companies, because of its mild climate. Townspeople and circus people formed relationships and collaborated on civic projects. An estimated twenty circuses at times were based in Hugo, and in 2018 three still operate here: Carson and Barnes, Kelly Miller, and Culpepper & Merriweather. All are tent circuses that travel the region by road.[9]

David Rawls (born 1948) grew up in a circus family, who performed with Famous Cole Circus. In addition to performing on trampoline with his brother, he later learned all aspects of the business. In 1984 he became owner/manager of his own show, Kelly Miller Circus. He sold it in 2009. During this period, he also had been selected as City Manager of Hugo for a time, and was elected and served as Mayor of the city at another time.[9]

In late 1993, a number of violent incidents occurred. Before Christmas, a shootout took place in a Wal-Mart parking lot. Within one week in December, two fires occurred; the first was at the Booker T. Washington gymnasium on December 26. On December 28 a fire erupted in the central business district of Hugo, consuming five buildings and burning for four hours. The Belmont Hotel, which the area historical society was renovating, was destroyed. Area authorities suspected that the fires were arson.[10][11]

In 1937, under the Works Progress Administration program for public art, artist Joseph Fleck painted an oil-on-canvas mural, titled The Red Man of Oklahoma Sees the First Stage Coach, in the United States post office in Hugo. This building is now used as the Oklahoma School System Administration Building. Murals were produced from 1934 to 1943 in the United States through the Section of Painting and Sculpture, later called the Section of Fine Arts, of the Treasury Department.[12]

Hugo is the southern terminus of the Indian Nation Turnpike, a 105-mile (169 km) four-lane highway that runs northwest to Interstate 40 in Henryetta. It provides a vital transportation link from southeastern Oklahoma to the state's largest cities, Oklahoma City and Tulsa.

Agriculture (especially cotton farming), timber, and ranching have been mainstays of the city's economy since its beginning. With industrial scale agriculture, mechanization replaced numerous farm jobs.

Since the 1940s, circuses have used Hugo as their winter quarters and some regional circuses have been based here. Their owners and performers have often gotten involved in civic life.

The changing economy and culture of the later 20th century resulted in the 1970s opening of the Kiamichi Technology Center and the "Agriplex," originally the Choctaw County Agricultural Center.[6]

Hugo implemented a council-manager form of city government in 1995. Council members are elected from single-member districts, and hire a professional manager to oversee operations of the city.[6]

Hugo is served by the city-operated Stan Stamper Municipal Airport, with one 4,007-by-75-foot (1,221 m × 23 m) runway. The airport has ten aircraft based on the field. It supports medical air ambulance operations by EagleMed, as well as scheduled cargo operations for all of southeastern Oklahoma, via a flight from Tulsa operated by Martinaire on behalf of UPS.[citation needed]