Skip to content
This article is about the section of U.S. Route 66 in Kansas. For the entire route, see U.S. Route 66.

U.S. Route 66 (US 66, Route 66), the historic east–west US highway between Chicago, Illinois and Santa Monica, California, passed through one brief segment in the southeastern corner of Kansas. It entered the state south of Baxter Springs and continued north until it crossed the Brush Creek, from where it turned east and left the state in Galena. After the decertification of the highway in 1985, this road segment was numbered as US-69 (alternate) from Quapaw, Oklahoma north to Riverton, Kansas and as K-66 (Kansas highway) from Riverton east to Route 66 in Missouri.[3] 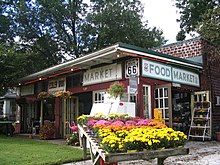 The eleven miles (18 km) of US-66 in Kansas retains much of the character of the Mother Road. It passes through Baxter Springs, Riverton and Galena in Cherokee County.

In Galena, US-66 originally turned north on Main Street, then east on Front Street before leaving the state as Route 66 to Central City, Missouri. This portion was changed in 1979 to remain on 7th Avenue, seven blocks south of the original routing, eastward to the Missouri state line.

In the northern part of Baxter Springs, US-66 originally turned West at the intersection of Military Avenue with 3rd Street. It followed this road as it curved to the north and became Willow Avenue, and later changed name again to 50th Street. Continuing north the route crossed over Brush Creek, just right from the Marsh arch Rainbow Bridge, which was originally used to cross it. The route continued northeast and as it became Beasley Road it turned east to get back to US-69 Alternate, also known as US-400 here, at the intersection with K-66. In the 1960s, the route changed and ran straight from Baxter Spring over US-69 Alternate to this intersection. Both alignments continued east onto K-66 passing through Riverton and crossing over the Spring River to get to Galena near the state line with Missouri.

US-66 enters Galena in the east over K-66. The first alignment, which was used from the commissioning in 1926 until the 1940s, followed Main Street to the north at the intersection of K-66 with Main Street, known as K-26 to the south. It would then turn east onto Front Street, crossing a viaduct over railroad tracks and entering Missouri shortly after. This alignment changed in the 1940s, as US-66 ran straight across Main Street and continue east on K-66 and enter Missouri a little bit more to the south.

The entire route is in Cherokee County.

A restored Kan-O-Tex Service Station on Main Street in Galena was re-opened in 2007 as a roadside diner and souvenir shop called 'Four Women on the Route', and then under newer ownership, was renamed to 'Cars on the Route'. It sits in front of the former location of the Banks Hotel which was demolished in 1950s. Sitting to the north of the station is the historic 'bordello' which currently is an antique store. It was first designated to be a bed and breakfast before becoming an antique shop. Located west across the street from the station is the Smith & Moeller Building (built in 1896) as a lumber and building supply house. In 1932, it became the Front Street Garage selling tires and Phillips 66 gas, later selling White Rose gasoline.

Buildings and structures on the National Register of Historic Places in Kansas include the Baxter Springs Independent Oil and Gas Service Station (now a tourist information site for US-66 in Kansas),[7] the Brush Creek Bridge,[8] and the Williams' Store in Riverton.[9] A 1.2-mile (1.9 km) section of the road between the Missouri state line and Galena is listed on the National Register as the Kansas Route 66 Historic District—East Galena.[10] In addition to the roadway, the district includes seven box culverts, a triple box culvert, and the Galena Viaduct. Although the roadway and all the structures were built during 1922-23, about three years before Route 66 was designated as a federal highway, it was deemed that "as a group these elements, together with their setting, form a cultural landscape that clearly conveys the historic feeling of Route 66."[10]

While buildings and structures on this section of US-66 in its 1950s heyday included five major trucking companies, a series of motels and tourist courts (Sunbeam Tourist Camp, Camp Joy, Baxter Court Cabins, Satterlee’s Tourist Cabins, Capistrano Motel) alongside restaurants, roadhouses, filling stations, souvenir stands and commercial stores, by 2002 almost all of the tourist lodging had been demolished. Only a portion of the former Satterlee's remains; it had been converted to storage space. Food service establishments fared somewhat better by relying on a strong local clientele after I-44 bypassed the state in 1961,[4] but ultimately lead and zinc mine closures in the Tri-State district plus the diversion of US-66 traffic by I-44 led to the closure of many local Cherokee County businesses.