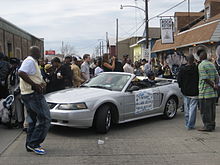 The soup consists of stewed beef (such as brisket) in beef-based broth served on top of noodles and garnished with half a hard-boiled egg and chopped green onions.[1] Cajun or Creole seasoning and chili powder are often added to the broth.

Yaka mein is sometimes referred to as "Old Sober", as it is commonly prescribed by locals as a cure for hangovers.[2] Vendors are common at New Orleans second lines. (The dish is also now offered in a more commercial setting at the New Orleans Jazz & Heritage Festival, along with many other Creole and Cajun specialties.[1]) The soup is well loved by locals but not well known outside of the city and its surrounding region.[3]

The dish is also found in Montreal, Canada,[4] Norfolk, Virginia/Baltimore, Philadelphia, Pittsburgh, and Bellevue, Pennsylvania carry out restaurants. Some versions of Yaka Mein consists of thick wheat noodles (similar to udon) in a ketchup-based sauce or brown gravy, accompanied by thickly sliced onions, a hard-boiled egg, and fried noodles.[5][self-published source?] Roast pork (char siu), chicken, and seafood can be added, with some restaurants including the option of pigs' feet.[6]

The phonetics of yaka mein is similar to the Cantonese pronunciation for "one order of noodles" (一個麵, Cantonese: jat1 go3 min6), a phrase commonly said by small restaurant waitstaffs to their kitchen to prepare an order of the restaurant's house noodle dish. However it is unclear if this is the origin of the name.

The dish is spelled in innumerable ways, all with phonetic similarities. A non-comprehensive list of these spellings includes:

The origins of yaka mein are uncertain, and there are at least two propositions:[1] Some sources, including the late New Orleans chef Leah Chase, have claimed that yaka mein originated in New Orleans's now extinct Chinatown that was established by Chinese immigrants brought from California during the mid-19th century to build the railroads between Houston and New Orleans[1] and work in the sugar plantations of the American South. It was during this period that the Chinese noodle soup adapted to local Creole and Chinese clientele.[9]

Regardless of its North American origins, by the 1920s yaka mein was already known in other parts of North America. In a 1927 article published in Maclean's magazine, the author indicated that "yet-ca mein" consisted of noodles or vermicelli boiled in rich stock, divided into individual bowls and garnished with sliced hard-boiled egg and sliced and chopped cooked meats.[8] The author also indicated that other noodles dishes served in disparate fashions may also be collectively known as yet-ca mein.[8]

In the movie Whipsaw, from 1935, starring Myrna Loy, a character in New Orleans places a phone order with a Chinese restaurant for, among other things, Yaka mein. This mention supports the origin story cited by Leah Chase.

The cooking show Chopped (Season 1 Episode 2: Pride of New Orleans) posits that it was introduced to the US by African American troops who fought in the Korean War and returned with a taste for some of the noodle soup dishes they had in Korea. However, the previously noted references from the 1920s and 1930s contradict this.