Skip to content
This article is about the Civil War battle. For historic sites related to the battle, see Civil War batteries of Helena, Arkansas and James C. Tappan House.
Battle of the American Civil War

The Battle of Helena, also known as the Attack on Helena, was a battle of the American Civil War fought on July 4, 1863, in Helena, Arkansas. The battle was a failed Confederate attempt to relieve pressure on the besieged city of Vicksburg. The Union victory at Helena paved the way for the fall of Little Rock.

Lieutenant-General Theophilus Holmes, commander of the Confederate's District of Arkansas, planned a coordinated attack from three sides on the formidable Federal fortifications surrounding Helena in order to relieve pressure on Vicksburg and to prevent Helena being used as a base to attack further into Arkansas. Holmes wrote to General Kirby Smith, commander of the Trans-Mississippi Department, and received permission to attack Helena.[citation needed]

Infantry under Major-General Sterling Price and cavalry under Brigadier-General John Marmaduke would move from Jacksonport to the vicinity of Helena. Price and Marmaduke would meet up with infantry out of Little Rock, under Brigadier-General James Fagan. Holmes, accompanied by Arkansas Governor Harris Flanagin, traveled to Helena to take personal command of the attack.[citation needed]

Major-General Benjamin Prentiss, in command of the Union's District of Eastern Arkansas, was headquartered at Helena with approximately 20,000 troops. Brigadier-General Frederick Salomon commanded a division from 13th Corps and had been placed in charge of the forces manning the defenses of Helena, a Mississippi River port town at the terminus of Crowley's Ridge and ringed by steep hills cut by heavily thicketed ravines. Four artillery batteries with breastworks and rifle pits had been placed in a semicircle around the town. In addition, the USS Tyler, a "timber-clad" gunboat, had been assigned to support Prentiss.[1]

Prentiss received word that an attack was in the works and actively worked to slow the movement of Confederate forces by felling trees. Helena itself was overcrowded with federal troops and was suffering from housing shortages and poor health and sanitation facilities. Occupying soldiers had dubbed the town "Hell-in Arkansas".[2] Just prior to the battle, a large number of troops were transferred to Vicksburg to strengthen the siege around that city. This transfer left only about 4,000 Union soldiers to protect the Federal enclave at Helena.[citation needed] 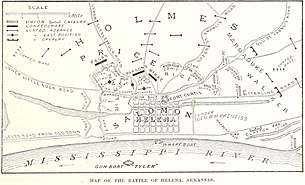 Map of the Battle of Helena, Arkansas

Holmes planned for a dawn attack with Marmaduke's 1,700 dismounted cavalry attacking fortified Rightor Hill northwest of the town and capturing the artillery battery stationed there. Fagan's 1,300 men were assigned to capture Hindman's Hill southwest of the city. Brigadier-General Lucius Walker was assigned the task of guarding Marmaduke's flank and preventing Union reinforcements from reaching Rightor Hill. The main attack however, would take place in the center with Sterling Price's 3,100 men seizing Graveyard Hill and the battery protecting it.[citation needed]

Marmaduke's assault ran into trouble quickly and began taking artillery and small arms fire from his left flank. Walker was supposed to intervene for Marmaduke, but failed to come to his aid out of concern for his own exposed position. Walker's failure would eventually lead to bad blood between Marmaduke and Walker that ended in a bloody duel during the campaign for Little Rock.[3] The southwest and center elements of the Confederate attack also suffered from failed communications and misinterpreted orders. Fagan and Price failed to coordinate their attacks due to Holmes' vague order to "attack at daylight". Price interpreted this order to mean an attack at sunrise and Fagan interpreted it to mean an attack at first light.[citation needed]

Fagan was surprised to find his attack on Hindman Hill was opposed by artillery fire from Graveyard Hill. Fagan had expected Price to be engaged already with that battery. Fagan's artillery had not been able to reach the battlefield because of felled trees blocking the road. Fagan had no artillery available to silence the Federal guns and had no choice but to order his troops to try to take the hill while under artillery fire. Fagan's men reached the summit of the hill and managed to seize the outer fortifications but were pinned down just short of the summit by the two Union batteries.[4] 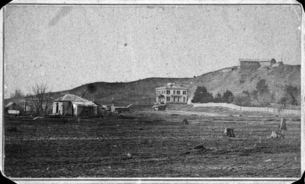 Price's assault on the center of the Union lines did not commence until almost an hour after Fagan's attack had begun. Price's men charged the Federal lines but were repulsed by concentrated artillery fire from the batteries and the Tyler. Price's Confederates made two more desperate charges before successfully capturing the guns on Graveyard Hill. Price attempted to turn the guns on the remaining Federals but found that the guns had been successfully disabled before their capture.[4]

The Confederates had achieved some success despite the miscommunications. Fagan held most of the fortifications to the southwest and Price held the high ground in the center of the Union lines.[1] Holmes arrived on Graveyard Hill and failed to press his advantage home. Holmes was seemingly unable to decide if he should support Marmaduke on his left flank, Fagan on his right flank, or press his advantage in the center and instead issued a series of confusing orders that led to partial measures which failed to turn the tide in any of the three positions.[citation needed]

The exposed Confederates were targeted by every remaining gun on the battlefield as well as the heavy guns of the Tyler. By 10:30, Holmes realized that his position had deteriorated and that he could make no further headway. A general retreat was ordered, and the attack on the Union base had failed.[citation needed]

No longer threatened, Helena became an important Union enclave on the Mississippi River and would become the base for the successful advance upon the Arkansas state capital later in the same year.[5]

Today, several markers and monuments are located inside Helena. The Civil War Trust, a division of the American Battlefield Trust, and its partners have acquired and preserved 56 acres (23 ha) of the battlefield.[6]