Skip to content
Not to be confused with Battle of Saint-Charles.

The Battle of St. Charles (also known as the Engagement at St. Charles) was a naval engagement and infantry battle during the American Civil War. It was fought on June 17, 1862, between eight Union ships, including USS Mound City, and several Confederate shore guns. A Confederate gun hit Mound City's steam drum, causing an explosion which resulted in heavy casualties: 105 of the 175-man crew were killed.[1] USS Mound City was then towed back to Memphis, Tennessee, and repaired. 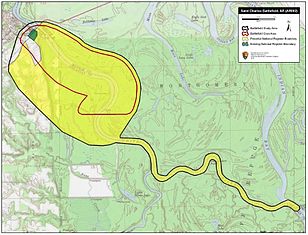 The Confederate gunboat Maurepas was hopelessly outclassed by the Federal ironclads. She was deliberately sunk in the river channel along with two steamboats. Two rifled 32-pounder guns were placed on the bluff along with four field guns, Captain Dunnington commanded the 79 gunners. Captain Williams directed 35 sharpshooters. Captain Joseph Fry was in overall command. The Mound City and St. Louis carried 13 guns each while the Lexington and Conestoga each mounted seven guns. In addition, the tug Tiger carried a 34-pound howitzer. There were three transports ferrying 1,000–1,500 soldiers under Colonel Graham N. Fitch.[2]

The Confederates spiked their cannons and retreated. Hindman admitted a loss of six killed, one wounded, and eight missing, including Fry wounded and taken prisoner. Hindman claimed that his force inflicted 200 casualties, including 180 scalded to death on the Mound City.[3]

More than 82 percent of the battlefield is protected from development by the US Fish and Wildlife Service and the Arkansas Natural Heritage Commission.[4]