Shortcut
The United States of America is a federal republic of 50 states, a capital district, and a number of other territories. It is located mostly in central North America. The U.S. has three land borders, two with Canada and one with Mexico, and is otherwise bounded by the Pacific Ocean, the Bering Sea, the Arctic Ocean and the Atlantic Ocean. Of the 50 states, only Alaska and Hawaii are not contiguous with any other state. The U.S. also has a collection of districts, territories, and possessions around the world. Each state has a high level of local autonomy according to the system of federalism. The U.S. traces its national origin to the declaration by 13 British colonies in 1776 that they were free and independent states. They were recognized as such by the Treaty of Paris in 1783. Since then, the nation has grown to become a global superpower and exerts a high level of economic, political, military, and cultural influence.

More about… the United States, its history and diversity
Refresh with new selections below (purge)

Yellowstone National Park, set aside as a national park on March 1, 1872, is located mostly in the U.S. state of Wyoming, though it also extends into Montana and Idaho. The park was the first of its kind, and is known for its wildlife and geothermal features, especially Old Faithful Geyser, one of the most popular areas in the park.

Aside from visits by mountain men during the early to mid-1800s, organized exploration did not begin until the late 1860s. The U.S. Army was commissioned to oversee the park just after its establishment. In 1917, administration of the park was transferred to the National Park Service, which had been created the previous year. Hundreds of structures have been built and are protected for their architectural and historical significance, and researchers have examined more than 1,000 archaeological sites.

Yellowstone National Park spans an area of 3,472 square miles (8,987 km²), comprising lakes, canyons, rivers and mountain ranges. Yellowstone Lake is one of the largest high-altitude lakes in North America and is centered over the Yellowstone Caldera, the largest supervolcano on the continent. Half of the world's geothermal features are in Yellowstone, fueled by this ongoing volcanism. The park is the centerpiece of the Greater Yellowstone Ecosystem, the largest remaining, nearly-intact ecosystem in the Earth's northern temperate zone.

Hundreds of species of mammals, birds, fish and reptiles have been documented. The vast forests and grasslands also include unique species of plants. Grizzlies, wolves, and free-ranging herds of bison and elk live in the park. Forest fires occur in the park each year; in the large forest fires of 1988, nearly one third of the park burned. Yellowstone has numerous recreational opportunities, including hiking, camping, boating, fishing and sightseeing. Paved roads provide close access to the major geothermal areas as well as some of the lakes and waterfalls. During the winter, visitors often access the park by way of guided tours that use either snow coaches or snowmobile.

Smedley Darlington Butler (July 30, 1881 – June 21, 1940), nicknamed "The Fighting Quaker" and "Old Gimlet Eye", was a Major General in the U.S. Marine Corps, and at the time of his death the most decorated Marine in U.S. history. During his 34-year career as a Marine, he participated in military actions in the Philippines, China, in Central America and the Caribbean during the Banana Wars, and France in World War I. By the end of his career he had received 16 medals, five of which were for heroism. He is one of 19 people to twice receive the Medal of Honor, one of three to be awarded both the Marine Corps Brevet Medal and the Medal of Honor, and the only person to be awarded the Brevet Medal and two Medals of Honor, all for separate actions.

Butler continued his speaking engagements in an extended tour but in June 1940 checked himself into a naval hospital, dying a few weeks later from what was believed to be cancer. He was buried at Oaklands Cemetery in West Chester, Pennsylvania; his home has been maintained as a memorial and contains memorabilia collected during his various careers. 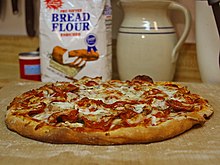 Pepperoni is one of the most popular toppings for pizza in the United States.

Many regional variations of pizza in the United States have been developed, many bearing only a casual resemblance to the Italian original. Pizza became most popular in America after soldiers stationed in Italy returned from World War II. During the latter half of the 20th century, pizza became an iconic dish of considerable popularity in the United States. The American slang term za can also refer to pizza. The thickness of the crust depends on what the consumer prefers; both thick and thin crust are popular. Often, foods such as barbecued chicken and bacon cheeseburgers are used to create new types of pizza. Read more...

The skyline of Seattle at dusk.

Interstate 15 in Arizona is part of Interstate 15 (I-15), a transcontinental Interstate Highway from San Diego, California, to the Canadian border. The highway segment passes through Mohave County in the far northwest corner of the U.S. state of Arizona. Despite its length of 29.43 miles (47.36 km) and isolation from the rest of the state in the remote Arizona Strip, it is notable for the scenic section through the Virgin River Gorge. The highway heads in a northeasterly direction from the Nevada border northeast of Mesquite, Nevada, to the Utah border southwest of St. George, Utah. The southern portion of the routing of I-15 was built close to the alignment of the old U.S. Route 91, but the northern section through the Virgin River Gorge was built along an alignment that previously had no road. The southern section of the highway was complete and opened in the early 1960s, while the section through the gorge did not open to traffic until 1973. When it opened, the portion of I-15 through the Virgin River Gorge was the most expensive section of rural Interstate per mile.

Angelina Jolie (Angelina Jolie Voight on June 4, 1975) is an American actress. She has received an Academy Award, two Screen Actors Guild Awards, and three Golden Globe Awards. Jolie promotes humanitarian causes, and is noted for her work with refugees as a Goodwill Ambassador for the United Nations High Commissioner for Refugees (UNHCR). She has been cited as one of the world's most attractive people, as well as the world's "most beautiful" woman, titles for which she has received substantial media attention.

The Willamette River as it passes through downtown Portland, Oregon.