Price's Missouri Expedition (August 29 – December 2, 1864), also known as Price's Raid or Price's Missouri Raid, was an unsuccessful Confederate cavalry raid through the states of Arkansas, Missouri, and Kansas in the Trans-Mississippi Theater of the American Civil War. Led by Confederate Major-General Sterling Price, the campaign's intention was to recapture Missouri and renew the Confederate initiative in the larger conflict.

Despite achieving several early victories, Price was ultimately defeated at the Battle of Westport by Union forces under Major-General Samuel R. Curtis in late October. He suffered further reverses at the hands of Union cavalry under Major-General Alfred Pleasonton at the Battle of Mine Creek, Kansas, forcing him to retreat back into Arkansas. Price's Missouri Expedition proved to be the last significant Southern operation west of the Mississippi River. Its failure bolstered confidence in an ultimate Union victory in the war, thereby contributing to President Abraham Lincoln's re-election. It also cemented Federal control over the hotly contested border state of Missouri.

After three years of bloody fighting, Confederate authorities were becoming desperate as the U.S. presidential election approached during the fall of 1864. The Union controlled the key western rivers and cities, Sherman was moving through Georgia and Lee was tied down to the defense of Richmond. With foreign recognition now hopeless, Abraham Lincoln's re-election would be disastrous for their cause. 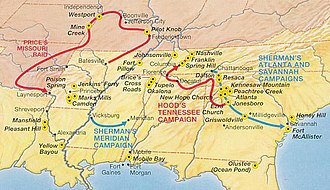 The strategic situation in the west in 1864.

Earlier that summer, the Confederacy had ordered General E. Kirby Smith, commander of the Trans-Mississippi Department, to send a corps under Lieutenant-General Richard Taylor across the Mississippi River to assist in the defense of Atlanta and Mobile. Such a crossing was impossible because of Union gunboat patrols on the river and Taylor was assigned to other duties.[1]

Inspired by preparations to divert Union attention from Taylor's crossing, Smith came up with another plan. He would recapture Missouri for the Confederacy, in the hope that it would help turn Northern opinion against Lincoln. He ordered Missouri-native Sterling Price to invade his home state and advance on St. Louis, capturing the city and its military arsenals. If St. Louis was too heavily defended, Price was to turn west and capture Jefferson City, the state capital. This would strike a major psychological blow, and provide justification for the inclusion in the Confederate flag of a star for Missouri. Price was then told to cross into Kansas and turn south through the Indian Territory, "sweeping that country of its mules, horses, cattle, and military supplies".[2]

Price assembled a force he named the Army of Missouri, consisting of 12,000 men and fourteen artillery pieces.[3] His army was divided into three divisions under Maj. Gen. James F. Fagan, Maj. Gen. John S. Marmaduke, and Brig. Gen. Joseph O. "Jo" Shelby. However, the infantry units originally assigned to Price were ordered to the Western Theater, changing his mission from an full-fledged invasion into a cavalry raid.[4]

Price's men were a mixture of the best and the worst, a full quarter of them being deserters who had been returned to duty.[5] Hundreds of Price's men marched barefoot, and most lacked basic equipment such as canteens and cartridge boxes. Many carried jugs for water and kept their ammunition in shirt and pants pockets.[5] Nevertheless, Price hoped the people of Missouri would rally to his side. In this he proved to be mistaken, as most Missourians did not wish to become involved in the conflict. Only mounted bands of pro-Confederate guerrillas joined his army, perhaps as many as 6,000 altogether.

The Union Army in Missouri included thousands of Missouri State Militia cavalry, which would play a key role in defeating Price, together with the XVI Corps of Maj. Gen. Andrew J. Smith. These were augmented by Maj. Gen. Alfred Pleasonton's cavalry division, detached from William S. Rosecrans's Department of Missouri. As Price commenced his campaign, Smith's corps was on naval transports leaving Cairo, Illinois to join Gen. William T. Sherman's army in Georgia; Rosecrans requested these troops be assigned to Missouri to deal with the threat, and Army Chief of Staff Henry W. Halleck immediately complied. By mid-October, more troops had arrived from the Kansas border under Maj. Gen. Samuel R. Curtis, Price's old adversary at the Battle of Pea Ridge and commander of the newly activated Army of the Border. Curtis commanded the divisions of Maj. Gen. James G. Blunt (cavalry), Maj. Gen. George W. Dietzler (Kansas Militia), Pleasonton's cavalry, and two infantry divisions from Smith's corps under Colonels Joseph J. Woods and David C. Moore—about 35,000 men in all.[6] The Confederates were already greatly outnumbered.

Price departed on his horse, Bucephalus, from Camden, Arkansas, on August 28, 1864. The following day he linked up with two divisions in Princeton, and then a third in Pocahontas on September 13. His combined force entered Missouri on September 19. Though Missouri pro-Union militia skirmished with the invading force almost daily, Price's first full battle did not come until September 27, at Pilot Knob, southwest of St. Louis in Iron County.[3] 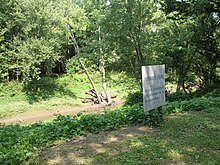 Hoping to avoid Fort Smith, Arkansas, Price swung west into the Indian Territory and Texas before returning to Arkansas on December 2. He had lost more than half of his original force of 12,000, including thousands of the guerrillas who joined him. He reported to Kirby Smith that he "marched 1,434 miles (2,308 km), fought 43 battles and skirmishes, captured and paroled over 3,000 Federal officers and men, captured 18 pieces of artillery ... and destroyed Missouri property ... of $10,000,000 in value."[27] Nevertheless, Price's Missouri Expedition was a total failure and contributed, together with Union successes in Virginia and Georgia, to the re-election of President Lincoln.

A second unintended consequence of Price's Missouri Expedition was that it had largely cleared Missouri of the pro-Confederate guerrillas who belonged to no one's army, since almost all of those who had joined him were either killed or followed him out of the state. Price's Missouri Expedition proved to be the final Confederate offensive in the Trans-Mississippi region during the war.

In his paper Assessing Compound Warfare During Price's Raid, written as a thesis for the U.S. Army Command and General Staff College, Major Dale E. Davis postulates that Price's Missouri Expedition failed primarily due to his inability to properly employ the principles of "compound warfare". This requires an inferior power to effectively utilize regular and irregular forces in concert (such as was done by the North Vietnamese and Viet Cong against the French and Americans during the Vietnam War) to defeat a superior army. He also blamed Price's slow rate of movement during his campaign, and the close proximity of Confederate irregulars to his regular force for this outcome.[28]

Major Davis observes that by wasting valuable time, ammunition and men in relatively meaningless assaults on Fort Davidson, Glasgow, Sedalia and Boonville, Price offered Union General Rosecrans time he might not otherwise have had to organize an effective response. Furthermore, he says, Price's insistence on guarding an ever-expanding wagon train of looted military supplies and other items ultimately became "an albatross to [his] withdrawal".[29] Price, wrote Davis, ought to have used Confederate bushwhackers to harass Federal formations, forcing the Unionists to disperse large numbers of troops to pursue them over wide ranges of territory. This in turn would have reduced the number of effectives available to fight against Price's main force. Instead, Price kept many guerrillas close to his army and even incorporated some into his ranks, thus largely negating the value represented by their mobility and small, independent formations. This in turn allowed the Federal generals to ultimately concentrate a force large enough to trap and defeat Price at Westport, effectively ending his campaign and crushing one of the last hopes for the Confederacy in the Civil War.[30]