Skip to content
Military rank
This article is about the military officer. For the bird, see Leptoptilos. 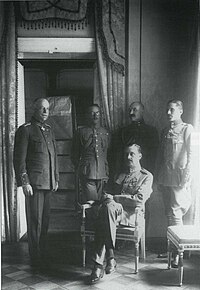 Adjutant is a military appointment given to an officer who assists the commanding officer with unit administration, mostly the management of human resources in an army unit. The term adjudant is used in French-speaking armed forces as a non-commissioned officer rank similar to a staff sergeant or warrant officer but is not equivalent to the role or appointment of an adjutant.

An adjutant general is commander of an army's administrative services.

President of Austria Rudolf Kirchschläger and commander Karl von Wohlgemuth. The president's adjutant in the background

Adjutant comes from the Latin adiutāns, present participle of the verb adiūtāre, frequentative form of adiuvāre 'to help'; the Romans actually used adiūtor for the noun.

In various uniformed hierarchies, the term is used for number of functions, but generally as a principal aide to a commanding officer.

A regimental adjutant, garrison adjutant etc. is a staff officer who assists the commanding officer of a regiment, battalion or garrison in the details of regimental, garrison or similar duty. In United States Army squadrons, the adjutant is often the officer-in-charge (OIC) of the administrative platoon.

UK and other Commonwealth countries

In the British Army, an adjutant (adj; sometimes actually referred to as this) is usually a senior captain, and sometimes a major. As the colonel's personal staff officer, he was once in charge of all the organisation, administration and discipline for a battalion or regiment, although now the bulk of administrative work is carried out by the (RAO). Until the 1970s the adjutant was also the regimental operations officer, although this job is now filled by a separate officer. In the British Army, adjutants are given field rank and as such are senior by appointment to all other captains, ranking just behind the majors. Unlike the RAO (who is an officer of the Adjutant General's Corps), the adjutant is a member of the corps or regiment of which their unit is a part.

The adjutant's job is not solely a 'backroom' one, since he usually accompanies the colonel—Captain David Wood, the adjutant of 2 Para, was killed in action at the Battle of Goose Green, for example. Normally, in a British Infantry battalion, the adjutant controls the battle whilst the CO commands it. As such, the adjutant is usually a person of significant influence within their battalion. In the Foot Guards, the adjutant of the unit in charge of Trooping the Colour is one of three officers on horseback.

In many Commonwealth armies, the adjutant performs much the same role as in the British Army. There is no RAO position within the Australian or Canadian armies, where an adjutant performs the administrative role with the assistance of a Chief Clerk, who usually has a rank of Warrant Officer Class Two.[1]

In the Canadian Army and Royal Canadian Air Force, the term adjutant is used in common with other English-speaking armies, and the corresponding French term is Capitaine-adjudant.

The Bangladesh Army has the appointment of adjutant which is similar to that in old British system. Though the authorization is of captain rank, often a lieutenant can be appointed as adjutant, although a Lieutenant posted as adjutant won't receive the staff pay as a captain with same appointment. Resaldar Adjutant (RA) or Warrant Officer Adjutant (WOA) is a position unique to the Bangladesh Army. He is a warrant officer who acts as deputy to the adjutant. In spite of this, the WOA or RA doesn't have any authority in official correspondences. His main role is the transmission and the execution of the adjutant's orders in all companies. On all formal parades, the standard procedure is for the Squadron/Company Sergeant Major to first report to the RA/WOA, and the RA/WOA in turn to report to the Adjutant.

The Pakistan Army has the appointment of Adjutant which is similar to that in old British system. Adjutants in the Pak Army are mostly captains and sometimes lieutenants. The Pak Army also holds the rank of junior adjutant (JA) who works as an aide to the adjutant and is of the rank of subedar, an equivalent rank to warrant officer or sergeant in Western armies. The Regimental Adjutant is also Commander of Regimental Provost and Assist Commanding Officer in all matters pertaining to discipline, training and operational planning.

In the US Army, historically the adjutant was generally a member of the branch or regiment of the parent unit (e.g. in an infantry battalion, the adjutant was usually an infantry officer). In 2008, as a result of the Army's transformation, the Human Resources community implemented the Personnel Services Delivery Redesign, which recoded the adjutant position in battalions to an officer from the Adjutant General branch.[2] The adjutant general at the battalion-level is generally a junior captain or senior first lieutenant and, in conjunction with the S-1 section, manages the administrative functions of the unit. The adjutant also works closely with the unit's command sergeant major for awards ceremonies, traditional ceremonial functions, casual events (hails and farewells), evaluation reports, and management of correspondence and other secretarial functions. Based upon the needs of the commander, an adjutant typically from the combat arms branches may still be specially appointed in modern-day to assist a brigade commander to ease his/her burden of command.

There is a bugle call announcing the adjutant that is still used in military ceremonies today.

In the USMC, the adjutant serves as the senior administrator for their unit, and is the OIC (officer in charge) of the S-1 or admin shop.

Adjutants coordinate administrative matters for Marine Corps staff sections and external agencies at the staff level. They ensure that every Marine in their command has administrative resources both for day-to-day tasks and long-term career progression. Adjutants supervise the execution of administrative policies. They receive and route correspondence, preparing responses to any special correspondence. They also manage their unit's legal matters and monitor fitness reports, among other administrative duties.[3]

An adjutant general is both a rank and a role that may represent the principal staff officer of an army; through the adjutant general, the commanding general receives communications and issues military orders.