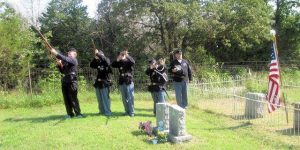 Photo of ceremony for commemoration of service and installation of G.A.R. marker at the grave of Wesley Fletcher Swift near Asher, Oklahoma. Bugler, later Rev., Wesley F. Swift served in the 3rd Iowa Volunteer Cavalry from 1862-1865, fought in 12 battles and was severely wounded in one of those battles. After the war, he was a circuit-riding preacher to the Chickasaw Indians of Southern Oklahoma.

This ceremony was conducted by the Jeremiah Smith Camp #1 of the Oklahoma Department of the SUVCW on August 17th, 2013. 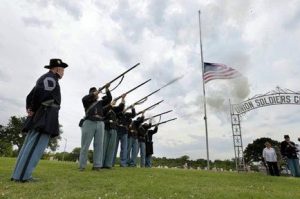 PDC Gene Turner giving the keynote speech at the G.A.R. Monument in Tulsa at Rosehill Cemetery on May 29th, 2014. The event was well attended with wreaths being presented by both SUVCW Camps and the Rachel Cormany Auxiliary #2. The 77th Pennsylvania Infantry provided the Honor Guard and the rifle salute.

We are honored to participate in Park Day to be held at the Honey Springs Battlefield and Visitor Center on Saturday, April 10 starting at 10:00 a.m. For those interested in volunteering, please email alynn@okhistory.org. Our phone number is also 918-473-5572. All COVID-19 related regulations will be in place for those who attend. Activities will include cleaning all of our new battlefield interpretive signage, and clearing brush on the battlefield. Bottled water will be provided to those who participate. Park Day is sponsored by the American Battlefield Trust. ... See MoreSee Less