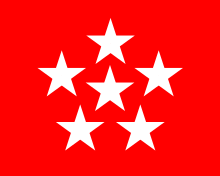 Proposed flag for General of the Armies of the United States

In the United States Armed Forces, a six-star rank is a proposed rank immediately superior to a five-star rank, possibly to be worn by the General of the Armies or Admiral of the Navy; however, this correlation was never officially recognized by the military or by Congress.

As such, the rank of Admiral of the Navy continued to be inactive. By 1955, the Navy concluded that the rank was honorary.[4] And while they held to the belief that it was equivalent to General of the Armies,[4] the Navy amended its regulations to establish fleet admiral as its highest achievable rank, adhering to the standard set by the law.[4]

On 21 January 1955, a draft resolution was proposed to the U.S. Senate to authorize the then-U.S. President Dwight D. Eisenhower to appoint Douglas MacArthur, then a five-star General of the Army, to the elevated to the "six-star rank" of General of the Armies of the United States in recognition of the great services to his country", with "such appointment to take effect as of the seventy-fifth anniversary of his birth, January 26, 1955."[5][6][7][8] The proposal had little chance of passing and was never voted on.[6]

The rank of General of the Armies had previously been granted, in 1919, to active-duty four-star General John J. Pershing. The markings used to identify Pershing's new ranking as higher than general was a bank of four gold (rather than silver) stars.[citation needed]

In 1976, as part of commemorations for the U.S. Bicentennial, General George Washington was posthumously promoted to the rank of General of the Armies of the United States.[9] Although the law did not actually specify the number of stars,[10] some U.S. newspapers[11][12][13] and members of Congress[14] described this as a "six-star rank". His appointment had been to serve as "General and Commander in Chief of the Army of the United Colonies".[15][16]