Fort Whipple, a United States (U.S.) Army post was temporarily established at Del Rio Springs, north of present day Chino Valley, Arizona, by Major Edward Banker Willis and Captain Nathaniel J. Pishon on December 23, 1863.[1] They led Companies C and F of the First California Volunteers and built the post under General Order #27 issued by General James Henry Carleton. The post was named Fort Whipple, after Amiel Weeks Whipple, an American military officer and topographical engineer. He served as a brigadier general in the American Civil War, and was mortally wounded on May 7, 1863 at the Battle of Chancellorsville in Virginia.

The Governor’s Party arrived at Fort Whipple on January 22, 1864. Consisting of most of the officials of the new territorial government of Arizona, Governor John Noble Goodwin used the fort as his headquarters while he visited the territory to determine a permanent location for the fort and territorial capital.

On May 18, 1864, Major Willis relocated the fort twenty-one miles south to a miner's tent settlement on the east bank of Granite Creek. The relocation of the fort was recommended by Governor Goodwin. Its placement was on higher ground, had better access to lumber, and the military could better protect miners. The fort was a large rectangular pine-log stockade. At the same time, Whipple Depot was established as part of the fort. In late May, Prescott (approximately 1½ miles west of the fort) was designated as the capital of the Arizona Territory.[2][3] In setting up the territorial government, Goodwin's administration oversaw the first election of members to the 1st Arizona Territorial Legislature in July 1864. In September 1864, they met in Prescott and adopted the Howell Code, which was the first set of statutory laws to govern the territory. The legislature also enacted legislation establishing the Arizona Historical Society, creation of mail routes, and establishing a public education system, which included a public university (the University of Arizona). The legislature's meeting in Prescott made it the de facto capital of the territory.

The old site at Del Rio Springs continued to be used by scouting parties and was called Camp Clark, in honor of John A. Clark, Surveyor General of the New Mexico Territory. The camp site was later sold, becoming Postle's Ranch.

Fort Whipple served as a tactical base for detachments of several regiments involved in the American Indian Wars between 1864 and 1886. Fort Whipple became headquarters of the Military Department of Arizona from 1870 to 1886 when Colonel George Crook was assigned to Fort Whipple. He was responsible for having a new fort built to replace the decrepit palisade fort. Between 1869 and 1872, the old fort stockade was razed and the majority of new construction occurred up until 1877.

From May 1885 to July 1886, Fort Whipple was home to Colonel Benjamin H. Grierson and Troop B of the 10th Cavalry Regiment (United States), also known as Buffalo Soldiers. By 1895, the fort was dilapidated and in 1897 was scheduled for deactivation.

In April 1898 when the United States declared war on Spain, the U.S. Army reopened Whipple Barracks as a point of muster for Arizona volunteers. 200 volunteers were recruited and called the “Arizona Cowboy Regiment”. They departed on May 4, 1898 to assemble in San Antonio, Texas. Officially called the 1st U.S. Volunteer Cavalry, they were nicknamed the “Rough Riders” and fought in Cuba.

Whipple Barracks was inactive between 1899 and 1902, and then reactivated in April 1902 to house troops. New barracks, buildings and quarters were constructed between 1903 and 1908. Four companies (about 500 soldiers' total) moved in.

The Prescott and Mount Union Railway operated an electric trolley passenger service between downtown Prescott and Fort Whipple from 1905 to 1912.

Arizona became a state in 1912. Troops stationed at Whipple Barracks were reassigned to other locations, and in 1913 Whipple Barracks was placed in a caretaker/un-garrisoned post status in 1913, and overseen by a small maintenance crew.

In 1918 during World War I, the U.S. Army reactivated Whipple Barracks as U.S. Army General Hospital #20. The hospital was designed to treat soldiers with respiratory illnesses, primarily tuberculosis (TB). Construction of new wards and other auxiliary buildings took place, including buildings for the American Red Cross and Young Men’s Christian Association (YMCA) organizations. [4]

In 1920 the property was loaned to the U.S. Public Health Service (USPHS) and operated under a permit from the War Department. The USPHS operated Whipple Barracks until Executive Order 3669 [5] was signed on April 29, 1922. This executive order transferred the permit and functions of the hospital to the newly established U.S. Veterans Bureau. The hospital designation became Hospital #50, Whipple Barracks, Arizona. The hospital retained its primary function in treating former soldiers with tuberculosis. The facility became one of the most complete sanatoriums for the treatment of tuberculosis in the country.

On July 3, 1930, Public Law Number 536 authorized President Hoover by executive order to consolidate the U.S. Veterans Bureau along with several agencies focused on the treatment of veterans to become the Veterans Administration (VA). March 4, 1931 was the official date transferring the Whipple Barracks title and property from the War Department to the newly-established Veterans Administration.

The main hospital building (Building 107) was constructed between 1938 and 1939, and opened to receive patients in October 1939.

On May 17, 1964, The Veterans Administration celebrated the 100-year anniversary of Fort Whipple. Medical Center Director Kenneth .J. O’Brien presided over the ceremony.

In March 1989, the Veterans Administration became a cabinet-agency and was renamed as the United States Department of Veterans Affairs (VA).

During 1995, a reorganization of the entire agency occurred to refocus and address a variety of veteran’s healthcare needs. The VA hospital in Prescott along with the other VA clinics that served the northern Arizona region was officially named the Northern Arizona VA Health Care System (NAVAHCS).

Certified on the National Register of Historic Places in 1999 by the National Park Service, the historic name of Fort Whipple is listed as “Fort Whipple/Department of Veterans Affairs Medical Center Historic District”.

Pictured is one of the military officer's quarters (Building 11, painted yellow and green) which has been turned into the Fort Whipple Museum, with artifacts and history about the fort and hospital, including medical instruments, Army weaponry, the Buffalo Soldiers, maps, photographs and memoirs written by those stationed there. The museum is operated as a joint project of the Sharlot Hall Museum and the Bob Stump Veterans Affairs Medical Center. 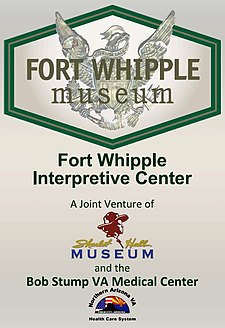 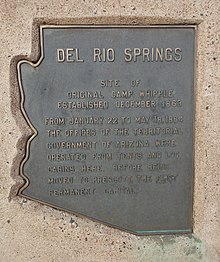 Days Past articles, a collaborative project of the Sharlot Hall Museum and the Prescott Corral of Westerners International