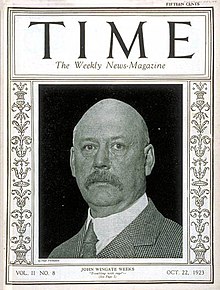 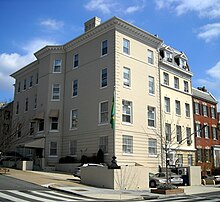 Weeks made a fortune in banking during the 1890s, after co-founding the Boston financial firm Hornblower & Weeks in 1888.[2] With his financial well-being assured, Weeks became active in politics, first at a local level in his then-home of Newton, Massachusetts, serving as alderman in 1899–1902 and as mayor in 1903–04. He then moved on to the national scene in 1905, when he was elected to serve the 12th Congressional District of Massachusetts in United States Congress.[3]

As a member of the United States House of Representatives and United States Senate, Weeks made various contributions to important banking and conservation legislation. His most notable accomplishment as Congressman was the passage of the Weeks Act in 1911, his name-sake bill that enabled the creation of national forests in the eastern United States.

In the election of 1918, Weeks was defeated in his re-election campaign. Due to the passage of the Seventeenth Amendment to the United States Constitution, this was the first time he had to face the voters of the general public. His defeat has been attributed to his refusal to support women's suffrage in the United States, and his opposition to the Nineteenth Amendment to the United States Constitution, a distinction he shared with Senator Willard Saulsbury Jr. of Delaware.[4] Despite his defeat for re-election to the Senate in 1918, Weeks remained an active and influential participant in the national Republican Party. He was an early supporter of the nomination of Warren G. Harding for President in 1920, and when Harding became President, he named Weeks to his cabinet.

As Secretary of War, Weeks was a competent, honest, and respected administrator and adviser, who guided the Department of War through its post-World War I downsizing. Weeks's hard work and long hours led to a stroke in April 1925, which led in turn to his resignation as Secretary in October of that year.

Weeks died several months later, at his summer home on Prospect Mountain in Lancaster, New Hampshire. His ashes were buried in Arlington National Cemetery near what is now known as Weeks Drive.[5]

Weeks's son, Charles Sinclair Weeks, was briefly a United States senator from Massachusetts, and was later Secretary of Commerce during the Eisenhower administration.

Weeks's summer home where he died is now open for tours as part of the Weeks State Park. A nearby mountain was named Mount Weeks in his honor.

The John W. Weeks Bridge, a footbridge over the Charles River on the campus of Harvard University in Boston and Cambridge, Massachusetts, was named for Weeks and opened in 1927.

The John Wingate Weeks Junior High School built in 1930 in Newton Centre, Massachusetts, was named for him.

During World War II, the U.S. Navy destroyer escort USS Weeks (DE-285) was named for Weeks. Her construction was cancelled in 1944.

The investment banking and brokerage firm Hornblower and Weeks, founded in 1888, was named for Weeks and co-founder Henry Hornblower.

Weeks Field in Fairbanks, Alaska was named after him.[6]