Margaret Mary Heckler (née O'Shaughnessy; June 21, 1931 – August 6, 2018) was an American politician, member of the Republican Party for Massachusetts who served in the United States House of Representatives for eight terms, from 1967–83 and was later the Secretary of Health and Human Services and Ambassador to Ireland under President Ronald Reagan. After her defeat in 1982, no woman would be elected to Congress from Massachusetts until Niki Tsongas in a special election in 2007.

She was born Margaret Mary O'Shaughnessy in Flushing, New York. Her undergraduate studies began at Albertus Magnus in New Haven, Connecticut and studied abroad at the University of Leiden in the Netherlands in 1952 and went on to graduate from Albertus Magnus College (B.A. 1953) and from Boston College Law School (LL.B. 1956) She was the only woman in her law school class. She was admitted to the bar in Massachusetts.[1] She was an editor of the Annual Survey of Massachusetts Law.

From 1963–67, Heckler was the first woman to serve on the Governor's council for the Commonwealth of Massachusetts, was a delegate to the Republican National Convention in 1964 and 1968 and was elected as a Republican to the 90th through the 97th Congresses (January 3, 1967 – January 3, 1983). Heckler received an Honorary Doctorate from Johnson & Wales University in 1975.

In Congress, Heckler was generally regarded as a "Rockefeller Republican" who supported moderate to liberal policies favored by voters in her state. Heckler voted in favor of the Civil Rights Act of 1968.[2] In 1977, she launched and founded the idea of the Congresswoman's Caucus, a bipartisan group of 14 members focused on equality for women in Social Security, tax laws, and related areas. Heckler was also an outspoken advocate for and cosponsor of the Equal Rights Amendment. She opposed abortion, but did not favor a constitutional amendment to ban it at that time. Later in life, Heckler became a speaker and activist for pro-life causes.

In Massachusetts, she was noted for building an especially effective network of constituent services that allowed her to breeze through several re-election bids in an overwhelmingly Democratic state. In the capital, Heckler was noted as a socialite with a penchant for high fashion [3]

Heckler won her first term in 1966 by defeating 42-year incumbent Republican Joseph W. Martin, Jr., in the primary. Martin, then 82, had previously served as Speaker of the House and was 46 years older than Heckler. Heckler won the subsequent general election with just 51 percent, but was easily reelected thereafter.

Following the 1980 census, Massachusetts lost one of its congressional seats due to a slow-growing population. Heckler's district, at the time the only one in Massachusetts large enough to not need redistricting, was combined with that of freshman Democratic Rep. Barney Frank. While the district was numerically Frank's district—the 4th—geographically it was more Heckler's district. When the two ran against each other in 1982, Heckler began the race as a front-runner. Although she opposed Reagan on 43 percent of House votes, Frank successfully portrayed Heckler as a Reagan ally by pointing to her early support for his tax cuts (which she later retracted). She lost the support of the National Organization for Women because she opposed federal funding for abortion. She went on to lose the race by a larger-than-expected margin of 20%. 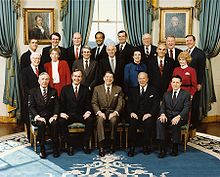 Heckler, second row far right, with the Reagan Cabinet in 1984

Following her defeat, Heckler turned down several government jobs — including as an assistant NASA administrator — before Reagan nominated her to replace retiring Health and Human Services Secretary Richard Schweiker in January 1983. She was confirmed on March 3, 1983, by an 82 to 3 vote in the Senate. The three dissenters were conservative Republicans.

Early on as secretary, Heckler commissioned the Secretarial Task Force to investigate a "sad and significant fact: there was a continuing disparity in the burden of death and illness experienced by Blacks and other minority Americans as compared with our nation's population as a whole," as she put it in her opening letter in The Secretary's Report on Black and Minority Health, also known as the Heckler Report. The Heckler Report provided the historical foundation for many reports thereafter and is often referenced as a landmark document for health disparity and health equity inquiry.[4] Clarice Reid was a member of the task force that helped produce this report.[5]

As secretary, Heckler publicly supported the Reagan administration's more conservative views presiding over staffing cuts in the department as part of the administration's spending reductions and was a frequent spokesperson on a wide array of public health issues, including the then-emerging AIDS crisis. It was very difficult for Heckler to get the topic of AIDS on the Cabinet meeting agendas, and she reportedly never discussed the crisis with President Reagan.[6]

While HHS secretary, Heckler repeatedly assured the American public that the nation's blood supply was "100% safe... for both the hemophiliac who requires large transfusions and for the average citizen who might need it for surgery".[7]

On January 21, 1985, Heckler became the first woman to be named designated survivor, serving in the role during the inauguration.

Heckler's tenure as secretary was also marked by a public soap opera that played out in the Washington press when her husband, John, filed for divorce in 1984. The episode was tinged by election-year concerns over the impact of the divorce on conservative voters and dragged on for months as the couple argued whether Massachusetts or Virginia, where Margaret Heckler had moved, had jurisdiction in the case.

Although Heckler stayed on in the Cabinet after Reagan's reelection and was widely regarded as an effective spokesperson, press accounts in late 1985 revealed that some White House and agency insiders regarded her as an ineffective manager. White House Chief of Staff Donald Regan reportedly pushed for Heckler's dismissal, but President Reagan told reporters "there has never been any thought in my mind to fire" her. Instead, she was appointed as Ambassador to Ireland, with a $16,000 pay cut that prompted the press to ridicule Reagan's characterization of the situation as a "promotion". She was confirmed as Ambassador in December 1985.

In her new position, Heckler played a crucial role in obtaining a $120 million U.S. grant to the International Fund for Ireland, an economic development organization.[8] She was a frequent guest on Irish television programs and was "by all accounts an effective spokesperson for her government's policies on everything from Central America to international trade".[8] In February 1989, Heckler announced her intent to resign and pursue a private career;[9] her term concluded in August 1989.

On May 31, 1987, Heckler became the first woman to deliver the commencement address in the history of the University of Scranton.[10] Heckler's papers are housed in the Burns Library at Boston College.