Woodson County (standard abbreviation: WO) is a county located in the U.S. state of Kansas. As of the 2010 census, the county population was 3,309.[1] Its county seat is Yates Center.[2]

For many millennia, the Great Plains of North America was inhabited by nomadic Native Americans. From the 16th century to 18th century, the Kingdom of France claimed ownership of large parts of North America. In 1762, after the French and Indian War, France secretly ceded New France to Spain, per the Treaty of Fontainebleau.

In 1854, the Kansas Territory was organized, then in 1861 Kansas became the 34th U.S. state. In 1855, Woodson County was established. Fort Belmont was used during the Civil War and had received refugees from the Trail of Blood on Ice. Opothleyahola is buried in an unmarked grave next to his daughter who died at the fort. 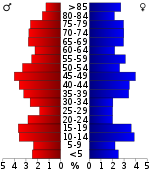 Woodson County is powerfully Republican. The only Democrat to win a majority in the county was Franklin D. Roosevelt in 1932, although Woodrow Wilson won a plurality in 1912. In contrast, Charles Evans Hughes in 1916 & George H.W. Bush in 1992 are the only Republican winners of the county who only managed to win a plurality of its votes. 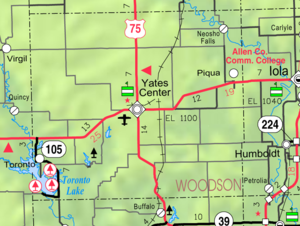 Woodson County is divided into six townships. The city of Yates Center is considered governmentally independent and is excluded from the census figures for the townships. In the following table, the population center is the largest city (or cities) included in that township's population total, if it is of a significant size.

See also: List of books about Kansas, including historical information about its counties and cities