John Sappington Marmaduke (March 14, 1833 – December 28, 1887) served as the 25th governor of Missouri from 1885 until his death in 1887. During the American Civil War, he was a senior officer of the Confederate States Army who commanded cavalry in the Trans-Mississippi Theater.

John Sappington Marmaduke was born on March 14, 1833, in Saline County, Missouri, the second son of ten children.[1] His father, Meredith M. Marmaduke (1791–1864), served as the 8th governor of Missouri, succeeding to office after the suicide of his predecessor. The family was quite political, and Marmaduke's great-grandfather, John Breathitt, had served as the governor of Kentucky from 1832 to 1834, dying in office.[2]

Marmaduke attended Chapel Hill Academy in Lafayette County, Missouri and Masonic College in Lexington, Missouri, before attending Yale University for two years and then Harvard University for another year.[2] U.S. Representative John S. Phelps appointed Marmaduke to the United States Military Academy, from which he graduated in 1857, placing 30th out of 38 students.[3] He served as a second lieutenant in the 1st United States Mounted Riflemen, before being transferred to the 2d United States Cavalry under Colonel Albert Sidney Johnston. Marmaduke later served in the Utah War and was posted to Camp Floyd, Utah, in 1858–1860.[3] 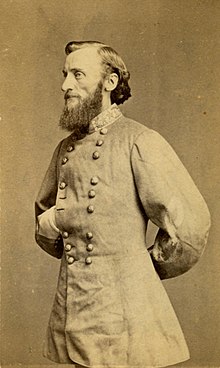 Marmaduke was on duty in the New Mexico Territory in the spring of 1861 when he received news that Missouri had seceded from the Union. He returned home to meet with his father, a strong Unionist. Afterwards, Marmaduke decided to resign from the United States Army, effective April 1861. Pro-secession Missouri Governor Claiborne F. Jackson, Marmaduke's uncle, soon appointed him as the colonel of the 1st Regiment of Rifles, a unit from Saline County, Missouri, in the Missouri State Guard.[3]

Governor Jackson departed Jefferson City, Missouri in June, along with State Guard commander Major-General Sterling Price, to recruit more troops. Marmaduke and his regiment met them at Boonville, Missouri. Within a short time, Price and Jackson left, leaving Marmaduke in charge of a small force of militia. Marmaduke realized his troops were not adequately prepared for combat, but Governor Jackson ordered him to make a stand against Union forces who had entered the state. Federal Brigadier-General Nathaniel Lyon's 1,700 well-trained and equipped soldiers easily routed Marmaduke's untrained and poorly armed force at the Battle of Boonville on June 17, 1861. The skirmish was mockingly dubbed "the Boonville Races" by Unionists, since Marmaduke's recruits broke and ran after 20 minutes of battle.[2]

Disgusted by the situation, Marmaduke resigned his commission in the Missouri State Guard and traveled to Richmond, Virginia, where he was commissioned a first lieutenant in the regular Confederate States Army.[2] The Confederate War Department ordered him to report for duty in Arkansas, where he soon was elected lieutenant-colonel of the 1st Arkansas Battalion.[3] He served on the staff of Lieutenant-General William J. Hardee, a former United States Military Academy instructor of infantry tactics. Marmaduke's former Mormon War commander, Albert Sidney Johnston, asked him to join his staff in early 1862.[4] Marmaduke was wounded in action at the Battle of Shiloh as colonel of the 3rd Confederate Regiment, incapacitating him for several months.[5]

In November 1862, the War Department confirmed Marmaduke's promotion to brigadier-general. His first battle as a brigade commander was at the Battle of Prairie Grove.[6] In April 1863, Marmaduke departed Arkansas with 5,000 men and ten artillery pieces and entered Union-held Missouri. However, he was repulsed at the Battle of Cape Girardeau and forced to return to Helena, Arkansas.[7] Controversy soon followed. In September 1863, he accused his immediate superior officer, Brigadier-General Lucius M. Walker, of cowardice in action for not being present with his men on the battlefield. Walker, slighted by the insult, challenged Marmaduke to a duel, which resulted in Walker's death on September 6, 1863.[7]

Marmaduke later commanded a cavalry division in the Trans-Mississippi Department, serving in the Red River Campaign. During this period, he once again was involved in controversy. Commanding a mixed force of Confederate troops, including Native-American soldiers of the 1st and 2nd Choctaw Regiments, Marmaduke defeated a Union foraging detachment at the Battle of Poison Spring, Arkansas on April 18, 1864. Marmaduke's men were accused of murdering African-American soldiers of the 1st Kansas Colored Volunteer Infantry (later designated the 79th U.S. Colored Infantry). Marmaduke and other white officers claimed that the accusations of illegal killings were overblown, and blamed any murders that may have happened on the Choctaw troops who, in the words of one Confederate, did "kill and scalp some" of the black troops. He was hailed in the Confederate press for what was publicized as a significant southern victory.

Marmaduke commanded a division in Major-General Sterling Price's Raid September–October 1864 into Missouri, where Marmaduke was captured at the Battle of Mine Creek in Kansas (by Private James Dunlavy of the 3rd Iowa Cavalry).[7] While still a prisoner of war at Johnson's Island in Ohio, Marmaduke was promoted to major-general in March 1865. He was released after the war ended.[6] His younger brother, Henry Hungerford Marmaduke, served in the Confederate States Navy, was captured and was imprisoned on Johnson's Island. He later served the federal government in negotiations with South American nations. He is buried in Arlington National Cemetery. Two other Marmaduke brothers died in the American Civil War.[8]

Marmaduke returned home to Missouri and settled in Carondelet, St. Louis. He worked briefly for an insurance company, whose ethics he found contrary to his own. He then edited an agricultural journal, and publicly accused the railroads of discriminatory pricing against local farmers. The governor soon appointed Marmaduke to the state's first Rail Commission.[8] Marmaduke decided to enter politics, but lost the 1880 Democratic nomination for governor to former Union general Thomas T. Crittenden, who had strong support and financial backing from the railroads. Undeterred, Marmaduke ran again for governor four years later, at a time when public opinion had changed, and railroad reform and regulation became more in vogue. Marmaduke conducted a campaign which apologetically highlighted his Confederate service, emphasized alleged abuses of Missourians by Union troops during the Civil War, celebrated the activities of pro-Confederate "partisan guerrillas" such as William Clarke Quantrill, claimed that the Republican Party in Missouri was a tool of "carpetbaggers" to oppress "native" Missourians, and made overt appeals to white racism. He was elected on a platform officially focused on cooperation between former Unionists and Confederates, promising an agenda which would produce a "New Missouri." He settled potentially crippling railroad strikes in 1885 and 1886. The following year, Marmaduke pushed laws through the state legislature that finally began regulating the state's railway industry. He also dramatically boosted the state's funding of public schools, with nearly a third of the annual budget allocated to education.

Marmaduke never married, and his two nieces served as hostesses at the governor's mansion.[9] Like his great-grandfather, he died while serving as governor. He contracted pneumonia late in 1887 and died in Jefferson City, Missouri, where he was buried in Woodland Cemetery.[9]

Marmaduke, Arkansas, is named after him.[10]