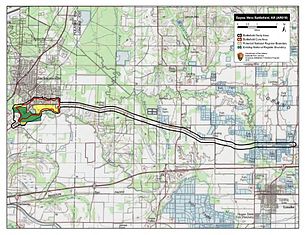 The Battle of Bayou Meto (August 27, 1863), also known as the Battle of Reed's Bridge, was fought in Pulaski County, Arkansas, during the American Civil War.

On August 27, Union forces commanded by John Davidson attacked an entrenched Confederate position north east of the Bayou Meto. The Union attack successfully dislodged the Confederate forces from their initial positions. The Confederate forces retreated across the Bayou Meto, burned Reed's Bridge, and repulsed Union attempts to cross the stream. The battle continued as an artillery duel until nightfall, at which point the Union forces retreated. Bayou Meto was the last successful Confederate opposition to the Union Advance on Little Rock. After Bayou Meto, General Frederick Steele decided to advance on Little Rock from the south-east, leading to the Battle of Bayou Fourche on September 10 and the fall of Little Rock.

After the battle and as the culmination of previous disagreements, Confederate commander John Marmaduke asked to be removed from General Lucius Walker's command under threat of resignation. Thereafter, Walker challenged Marmaduke to a duel in which Walker was mortally wounded. The core part of the Bayou Meto Battlefield is listed on the National Register of Historic Places; part of it is preserved as the Reed's Bridge Battlefield Heritage Park.